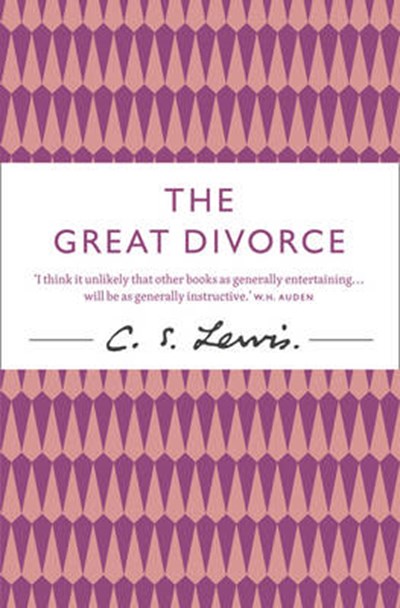 Join now Find out more
Publisher: HarperCollins Publishers
ISBN: 9780007461233
Published: 12/04/2012
Description Author Information Reviews
C.S. Lewis's dazzling allegory about heaven and hell and the chasm fixed between them, is one of his most brilliantly imaginative tales, as he takes issue with the ideas in William Blakes's The Marriage of Heaven and Hell. In a dream, the narrator finds himself in the grey limbo of Hell, where the disgruntled and ghostly inhabitants take a bus-ride to the plains of Heaven, where they meet angels and the souls of those already in Heaven. This striking fable portrays Hell as small and shrunken, less substantial than Heaven, which is bright and solid and the ultimate Reality. The occupants of Hell can never become part of Heaven, for their spiritual blindness prevents them from entering into its glorious reality. They prefer their own shrunken version of reality, to the joy which could be theirs. This powerful, exquisitely written fantasy is one of C.S. Lewis's most enduring works of fiction. As ever, Lewis communicates deep spiritual truths through the sheer power of the fantastic.

Born in Ireland in 1898, C.S. Lewis gained a triple First at Oxford and was Fellow and Tutor at Magdalen College from 1925-1954. In 1954 he becames Professor of Mediaeval and Renaissance Literature at Cambridge. C.S. Lewis was for many years an atheist, vividly describing his conversion in his autobiography Surprised by Joy :... "the most dejected and reluctant convert in all England." One of the most gifted and influential Christian writers of the century, he is also celebrated for his award-winning series of children's books, the Narnia Chronicles,as well as his literary criticism and science fiction. He died on 22 November 1963.

'There is attractive imagery and amusing satire... There are exciting speculations... Mr. Lewis rouses curiosity about life after death only to sharpen awareness of this world.' The Guardian