One Two Three Four: The Beatles in Time 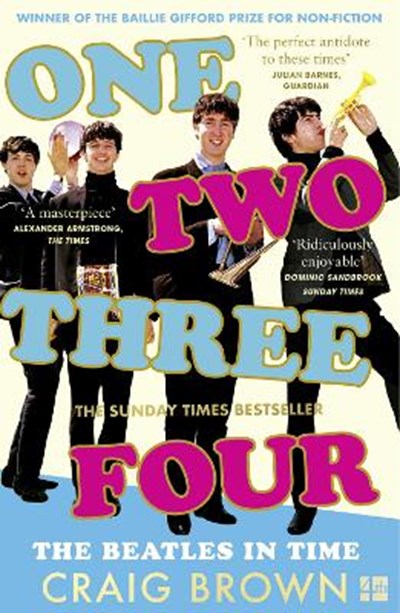 One Two Three Four: The Beatles in Time

Join now Find out more
Publisher: HarperCollins Publishers
ISBN: 9780008340032
Number of Pages: 656
Published: 18/03/2021
Width: 12.9 cm
Height: 19.8 cm
Description Author Information Reviews
WINNER OF THE BAILLIE GIFFORD PRIZE 2020 A Spectator Book of the Year * A Times Book of the Year * A Telegraph Book of the Year * A Sunday Times Book of the Year From the award-winning author of Ma'am Darling: 99 Glimpses of Princess Margaret comes a fascinating, hilarious, kaleidoscopic biography of the Fab Four. John Updike compared them to 'the sun coming out on an Easter morning'. Bob Dylan introduced them to drugs. The Duchess of Windsor adored them. Noel Coward despised them. JRR Tolkien snubbed them. The Rolling Stones copied them. Loenard Bernstein admired them. Muhammad Ali called them 'little sissies'. Successive Prime Ministers sucked up to them. No one has remained unaffected by the music of The Beatles. As Queen Elizabeth II observed on her golden wedding anniversary, 'Think what we would have missed if we had never heard The Beatles.' One Two Three Four traces the chance fusion of the four key elements that made up The Beatles: fire (John), water (Paul), air (George) and earth (Ringo). It also tells the bizarre and often unfortunate tales of the disparate and colourful people within their orbit, among them Fred Lennon, Yoko Ono, the Maharishi, Aunt Mimi, Helen Shapiro, the con artist Magic Alex, Phil Spector, their psychedelic dentist John Riley and their failed nemesis, Det Sgt Norman Pilcher. From the bestselling author of Ma'am Darling comes a kaleidoscopic mixture of history, etymology, diaries, autobiography, fan letters, essays, parallel lives, party lists, charts, interviews, announcements and stories. One Two Three Four joyfully echoes the frenetic hurly-burly of an era.

Craig Brown's last book, Ma'am Darling: 99 Glimpses of Princess Margaret won both the James Tait Black Prize for Biography and the South Bank Sky Arts Award for Literature. His previous book, One on One, was long-listed for the Samuel Johnson prize for Non-Fiction. He has been writing the parodic celebrity diary for Private Eye magazine for over thirty years, and is currently a columnist for the Daily Mail and the Mail on Sunday. Over the years, he has written for a wide range of newspapers and magazines, including Vanity Fair, the Sunday Times, the New Statesman, the Spectator, the Guardian and the New York Review of Books. He lives in Aldeburgh, Suffolk with his wife Frances Welch; they have two children.