Adventures in the Anthropocene

A Journey to the Heart of the Planet we Made 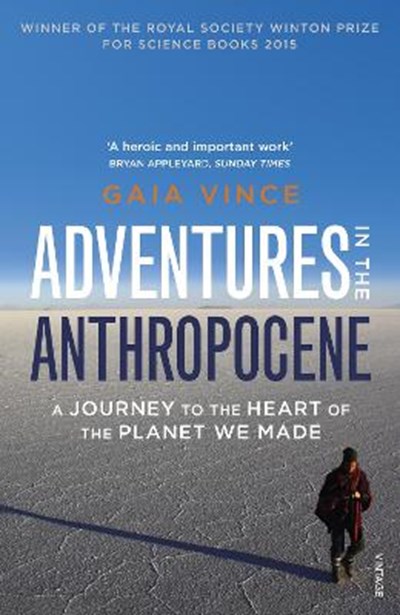 Adventures in the Anthropocene

A Journey to the Heart of the Planet we Made

QTY
Add to Basket
Publisher: Vintage Publishing
ISBN: 9780099572497
Number of Pages: 448
Published: 07/01/2016
Width: 12.9 cm
Height: 19.8 cm
Description Author Information Reviews
** Winner of Royal Society Winton Prize for Science Books 2015 ** We live in epoch-making times. The changes we humans have made in recent decades have altered our world beyond anything it has experienced in its 4.6 billion-year history. As a result, our planet is said to be crossing into the Anthropocene - the Age of Humans. Gaia Vince decided to travel the world at the start of this new age to see what life is really like for the people on the frontline of the planet we've made. From artificial glaciers in the Himalayas to painted mountains in Peru, electrified reefs in the Maldives to garbage islands in the Caribbean, Gaia found people doing the most extraordinary things to solve the problems that we ourselves have created. These stories show what the Anthropocene means for all of us - and they illuminate how we might engineer Earth for our future.

Gaia Vince is a journalist and broadcaster specialising in science, the environment, and social issues. She was awarded the 2015 Royal Society Winton Prize for Science Books, becoming the first solo female winner in the Prize's history. She has been an editor at Nature Climate Change, Nature and New Scientist. Her work has appeared in the Guardian, The Times, Science, Scientific American, the American Scholar, International New York Times, BBC online Australian Geographic and the Australian. She also devises and presents science documentaries for radio and television. She blogs at WanderingGaia.com and tweets at @WanderingGaia.