No Is Not Enough 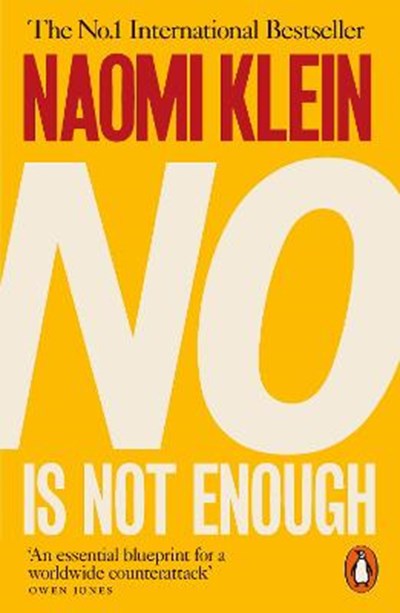 No Is Not Enough

QTY
Add to Basket
Publisher: Penguin Books Ltd
ISBN: 9780141986791
Number of Pages: 288
Published: 03/05/2018
Width: 12.9 cm
Height: 19.8 cm
Description Author Information Reviews
**The New York Times and Sunday Times Bestseller** 'An ordinary person's guide to hope. Read this book' Arundhati Roy 'As accessible as it is brilliant' Owen Jones 'A genuine page turner' Michelle Alexander Naomi Klein - award-winning journalist, bestselling author of No Logo, The Shock Doctrine and This Changes Everything, scourge of brand bullies and corporate liars - gives us the toolkit we need to survive our surreal, shocking age. 'This is a look at how we arrived at this surreal political moment, how to keep it from getting a lot worse, and how, if we keep our heads, we can flip the script.' Remember when love was supposed to Trump hate? Remember when the oil companies and bankers seemed to be running scared? What the hell happened? And what can we do about it? Naomi Klein shows us how we got here, and how we can make things better. No Is Not Enough reveals, among other things, that the disorientation we're feeling is deliberate. That around the world, shock political tactics are being used to generate crisis after crisis, designed to force through policies that will destroy people, the environment, the economy and our security. That extremism isn't a freak event - it's a toxic cocktail of our times. From how to trash the Trump megabrand to the art of reclaiming the populist argument, Naomi Klein shows all of us how we can break the spell and win the world we need. Don't let them get away with it. 'Who better than Naomi to make sense of this madness, and help us find a way out? A top-of-the-stack must read' Michael Stipe 'Naomi Klein's new book incites us brilliantly to interweave our No with a programmatic Yes. A manual for emancipation' Yanis Varoufakis 'Magnificent ... a courageous coruscating counterspell' Junot Diaz

Naomi Klein is an award-winning journalist, syndicated columnist and author of the international bestsellers No Logo, The Shock Doctrine, This Changes Everything: Capitalism vs the Climate, and No Is Not Enough: Defeating the New Shock Politics. In 2017 she joined The Intercept as Senior Correspondent. Recent articles have also appeared in the Guardian, The Nation, The New York Times, the New Yorker and Le Monde. In November 2016 she was awarded the Sydney Peace Prize in Australia.