King's College Choir, the Nine Lessons and Carols, and an English Singing Style 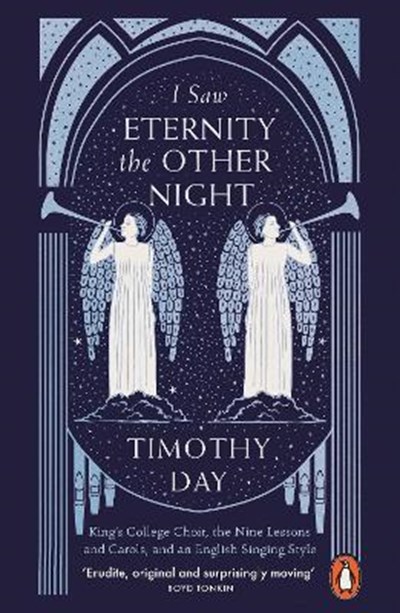 King's College Choir, the Nine Lessons and Carols, and an English Singing Style

QTY
Add to Basket
Publisher: Penguin Books Ltd
ISBN: 9780141988597
Number of Pages: 416
Published: 07/11/2019
Width: 12.9 cm
Height: 19.8 cm
Description Author Information Reviews
'Erudite, original and surprisingly moving ... This Christmas, as at every Christmas, millions of listeners will have relished the ethereal King's choir ... Day's meticulous history of a special choral sound investigates the creation of a style, and the evolution of a tradition, that now feels as anciently English as the stonework of King's chapel itself' Boyd Tonkin The sound of the choir of King's College, Cambridge - its voices perfectly blended, its emotions restrained, its impact sublime - has become famous all over the world, and for many, the distillation of a particular kind of Englishness. This is especially so at Christmas time, with the broadcast of the Festival of Nine Lessons and Carols, whose centenary is celebrated this year. How did this small band of men and boys in a famous fenland town in England come to sing in the extraordinary way they did in the twentieth and early twenty-first centuries? It has been widely assumed that the King's style essentially continues an English choral tradition inherited directly from the Middle Ages. In this original and illuminating book, Timothy Day shows that this could hardly be further from the truth. Until the 1930s, the singing at King's was full of high Victorian emotionalism, like that at many other English choral foundations well into the twentieth century. The choir's modern sound was brought about by two intertwined revolutions, one social and one musical. From 1928, singing with the trebles in place of the old lay clerks, the choir was fully made up of choral scholars - college men, reading for a degree. Under two exceptional directors of music - Boris Ord from 1929 and David Willcocks from 1958 - the style was transformed and the choir broadcast and recorded until it became the epitome of English choral singing, setting the benchmark for all other choral foundations either to imitate or to react against. Its style has now been taken over and adapted by classical performers who sing both sacred and secular music in secular settings all over the world with a precision inspired by the King's tradition. I Saw Eternity the Other Night investigates the timbres of voices, the enunciation of words, the use of vibrato. But the singing of all human beings, in whatever style, always reflects in profound and subtle ways their preoccupations and attitudes to life. These are the underlying themes explored by this book.

Timothy Day was for many years Curator of Western Art Music in the British Library's Sound Archive. He has written and lectured widely on English cathedral music, was a visiting senior research fellow at King's College, London 2006-11, and served on the Management Committee of the Research Centre for the History and Analysis of Recorded Music. For his work on this book, he was awarded a Leverhulme Research Fellowship. His previous books include A Century of Recorded Music: Listening to Musical History and Hereford Choral Society: An Unfinished History.