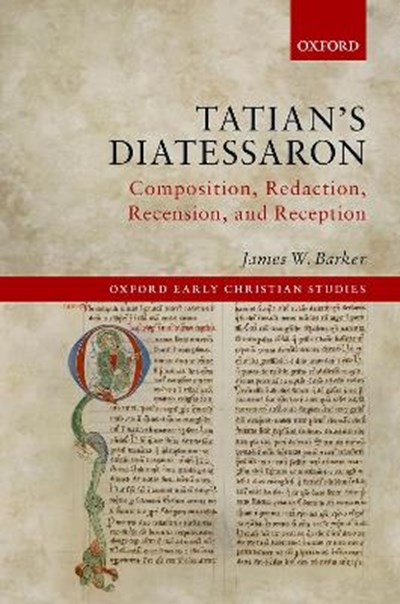 eBook FAQ
Add to Basket
Publisher: Oxford University Press
ISBN: 9780192844583
Number of Pages: 176
Published: 28/10/2021
Width: 16.5 cm
Height: 24.1 cm
Description Author Information Reviews
In the late-second century, Tatian the Assyrian constructed a new Gospel by intricately harmonizing Matthew, Mark, Luke, and John. Tatian's work became known as the Diatessaron, since it was derived 'out of the four' eventually canonical Gospels. Though it circulated widely for centuries, the Diatessaron disappeared in antiquity. Nevertheless, numerous ancient and medieval harmonies survive in various languages. Some texts are altogether independent of the Diatessaron, while others are definitely related. Yet even Tatian's known descendants differ in large and small ways, so attempts at reconstruction have proven confounding. In this book James W. Barker forges a new path in Diatessaron studies. Covering the widest array of manuscript evidence to date, Tatian's Diatessaron reconstructs the compositional and editorial practices by which Tatian wrote his Gospel. By sorting every extant witnesses according to its narrative sequence, the macrostructure of Tatian's Gospel becomes clear. Despite many shared agreements, there remain significant divergences between eastern and western witnesses. This book argues that the eastern ones preserve Tatian's order, whereas the western texts descend from a fourth-century recension of the Diatessaron. Victor of Capua and his scribe used the recension to produce the Latin Codex Fuldensis in the sixth century. More controversially, Barker offers new evidence that late medieval texts such as the Middle Dutch Stuttgart harmony independently preserve traces of the western recension. This study uncovers the composition and reception history behind one of early Christianity's most elusive texts.

James W. Barker is Associate Professor of New Testament at Western Kentucky University. In 2014 he received the Paul J. Achtemeier Award for New Testament Scholarship. He is the author of John's Use of Matthew (Fortress Press, 2015).