'Abdisho' of Nisibis and the Apologetic Tradition 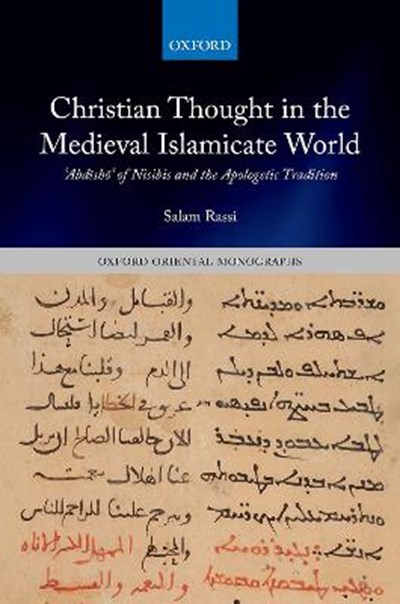 'Abdisho' of Nisibis and the Apologetic Tradition

eBook FAQ
Add to Basket
Publisher: Oxford University Press
ISBN: 9780192846761
Number of Pages: 320
Published: 08/02/2022
Width: 16.3 cm
Height: 24 cm
Description Author Information Reviews
Christian Thought in the Medieval Islamicate World: 'Abdisho' of Nisibis and the Apologetic Tradition is the first monograph-length study and intellectual biography of 'Abdisho' of Nisibis (d. 1318), bishop and polymath of the Church of the East. Focusing on his works of apologetic theology, it examines the intellectual strategies he employs to justify Christianity against Muslim (and to a lesser extent Jewish) criticisms. Better known to scholars of Syriac literature as a poet, jurist, and cataloguer, 'Abdisho' wrote a considerable number of works in the Arabic language, many of which have only recently come to light. He flourished at a time when Syriac Christian writers were becoming increasingly indebted to Islamic models of intellectual production. Yet many of his writings were composed during mounting religious tensions following the official conversion of the Ilkhanate to Islam in 1295. In the midst of these challenges, 'Abdisho' negotiates a centuries-long tradition of Syriac and Arabic apologetics to remind his readers of the verity of the Christian faith. His engagement with this tradition reveals how anti-Muslim apologetics had long shaped the articulation of Christian identity in the Middle East since the emergence of Islam. Through a selective process of encyclopaedism and systematisation, 'Abdisho' navigates a vast corpus of Syriac and Arabic apologetics to create a synthesis and theological canon that remains authoritative to this day.