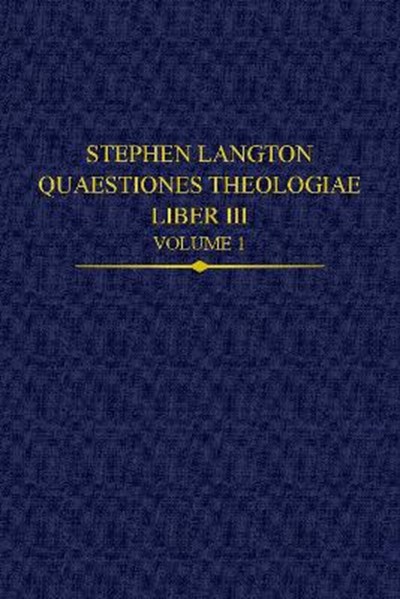 QTY
Add to Basket
Publisher: Oxford University Press
ISBN: 9780197267165
Number of Pages: 400
Published: 28/01/2021
Width: 16 cm
Height: 24 cm
Description Author Information Reviews
Stephen Langton (c.1228), later Archbishop of Canterbury, was a prominent master of theology, belonging to the first generation of scholars working at the faculty of theology of the nascent University of Paris. The Quaestiones Theologiae constitute his chief speculative work. Book III, volume 1, offers a critical edition of 24 disputed questions on Christology and faith. Each question is accompanied by a critical apparatus and source notes. The edition is preceded by an extensive analysis of Langton's views. The volume also contains an important supplement to the study of the whole manuscript tradition of Langton's QQuaestiones Theologiae and offers the first general stemma codicum of the Quaestiones.

Magdalena Bieniak is Assistant Professor of Philosophy at the University of Warsaw. She has published on a number of early-scholastic authors, such as Stephen Langton, Hugh of St-Cher, and Gilbert of Poitiers, as well as on Socinians. Wojciech Wciorka is Assistant Professor at the University of Warsaw. His research focuses on twelfth-century logic, its philosophical aspects, and its interface with theology.