Recreation for an Emperor 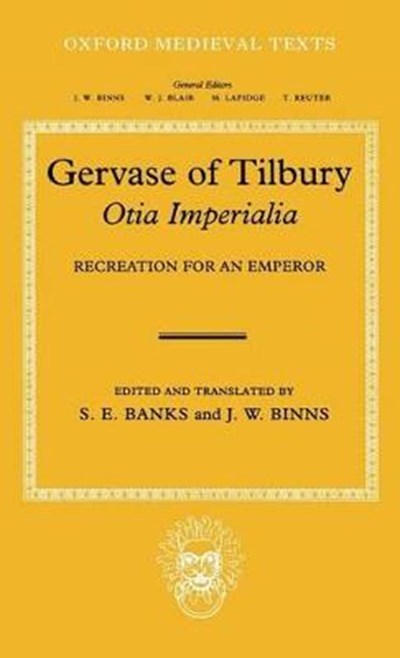 Recreation for an Emperor

QTY
Add to Basket
Publisher: Oxford University Press
ISBN: 9780198202882
Number of Pages: 1112
Published: 30/05/2002
Width: 14.4 cm
Height: 22.4 cm
Description Author Information Reviews
This is the first English translation and the first modern critical edition of Gervase of Tilbury's Otia Imperialia. Gervase wrote the Otia Imperialia in the early thirteenth century for his patron, the Holy Roman Emperor Otto IV. It presents an encyclopedic melange of cosmographical, historical, and geographical information and a wealth of learned and original accounts of folklore and popular belief. It also contains advice to Otto and pertinent remarks on the relationship between Empire and Papacy, together with scientific and theological speculation. The edition also includes Gervase's recently discovered Commentary on the Lord's Prayer. Gervase was a voracious and eclectic reader; his many borrowings are identified in this fully annotated edition.

a massive work of fine scholarship A. D. Carr, Folk Life S.E. Banks and J.W. Binns, with their bilingual edition, broad introduction, and excellent commentary, have fulfilled a demand long put forward in scholarship. This new edition does justice to Gervais of Tilbury, one of the intellectuals who was most well-read, versatile and open to the world at the turn of the twelfth century; without a doubt it will facilitate further research on this unusual personality and his very interesting work. ... eminently readable ... As a guide to the world view of an educated and well-travelled man of affairs at the beginning of the thirteenth century, this is a fascinating piece ... Whether it cheered up the Emperor Otto is not recorded, but it should certainly prove highly entertaining for any modern medievalist. Medium Aevum Not only have the editors provided a wholly readable translation, but also the annotation is extremely full and helpful, including a wide-ranging modern bibliography. English Historical Review Post-Classical Latin is now the great lost literature of Europe. Editions like this one bring it back to life. Tom Shippey, Times Literary Supplement ... a complete and reliable text and translation. Tom Shippey, Times Literary Supplement