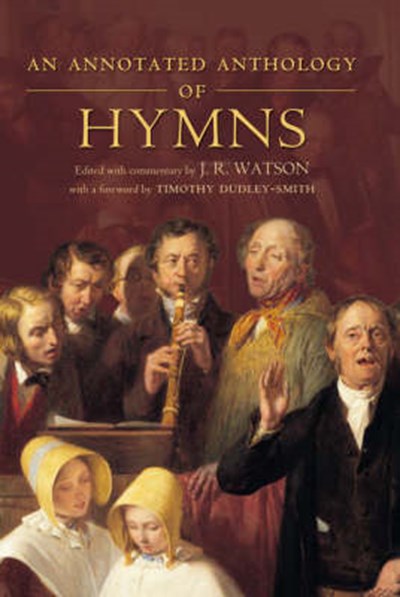 QTY
Add to Basket
Publisher: Oxford University Press
ISBN: 9780198269731
Number of Pages: 470
Published: 20/06/2002
Width: 16.3 cm
Height: 24.2 cm
Description Author Information Reviews
An Annotated Anthology of Hymns is a selection of 250 of the best-known hymns in the English language, including texts translated from Greek, Latin, German, and other languages. The selection includes hymns from the earliest years of the Christian church to the present day. This is not a book for worship: the hymns are printed in a chronological sequence and not by Christian season or subject, as they would be in a church hymn book. It is an anthology for those who would like to understand more about hymns: each one is given a commentary which sets it in context, identifies significant sources, and provides explanatory and critical material. An introductory essay discusses the hymn as a historical and literary form, and the way in which it appeals to so many people. This is a book which shows how, in the words of the foreword by Timothy Dudley-Smith, 'hymns lift the heart'. It will be treasured by those who already know something about hymns and it will delight all those who enjoy hymns and would like to know more about them.

J.R. Watson is Emeritus Professor of English and Emeritus Public Orator of the University of Durham. Twenty years ago he chose for the subject of his Inaugural Lecture, 'The Victorian Hymn'. He was serving at the time on the committee of the Methodist (and Ecumenical) Hymns and Psalms (1983), and later edited, with Kenneth Trickett, the Companion to Hymns and Psalms (1988). He was a member of the Archbishops' Commission on Church music, and more recently of the editorial committee responsible for the latest revision of Hymns Ancient and Modern, Common Praise (2000). His critical and historical study, The English Hymn, was published by Oxford University Press in 1997 (paperback 1999).

A book for those who already love hymns in the English language ... Watson's anthology is a fascinating read as well as a book to dip into when you get home from church and want to know more about the hymn you have just sung ... an informative work. Church Times Professor Watson's comments are expert without being flawless: his assessments charitable without claiming to be final ... his book sets down a marker for our generation. It is both a joy to read through and a vital work of reference. No serious student of hymns can now do without it, the nearest volume yet to that much-desired dream The Oxford Book of Hymns. New Directions More than a reference book. The editor is an enthusiast. Bulletin of The Hymn Society of Great Britain & Ireland It is a joy to handle ... He [Watson] is an expert guide on skilfully-inserted pauses, wisely-timed repetitions, or precisely-chosen adjectives; such easily-overlooked details may distinguish a good hymn from an average one, or great hymns from good ones ... This author does not mock what he clearly considers inferior but unexcludable. He is kind to Fanny Crosby in the west and Greenland's mountains up north. News of Hymnody It is a book to have at hand, to dip into and keep using. Many sermons and addresses will benefit from its inspiration and learning. Methodist Recorder Not only has Prof Richard Watson, who edited this anthology, the experience of working with hymnody over many years and the research to bring together material from many disciplines, he also has the felicity of written style which makes the book a joy to read. His ability to express in a few well-chosen words carefully made judgments is linked to a refreshing clarity of expression, so that the reader is encouraged to read on, knowing that the experience will be both profitable and pleasurable. Methodist Recorder Invaluable anthology ... There is much to enjoy here ... [Watson] guides the reader through each hymn, paying attention to form. Glyn Paflin, Times Literary Supplement It is a work of distinction, written with eloquence and grace. Watson writes as an enthusiast ... What Watson demonstrates is that competent hymns usually have a distinctive shape and idea, and that their writers have, if not a theology then at least an emphasis and style of their own. London Review of Books