Church and Society in Eighteenth-Century France: Volume 1: The Clerical Establishment and its Social Ramifications 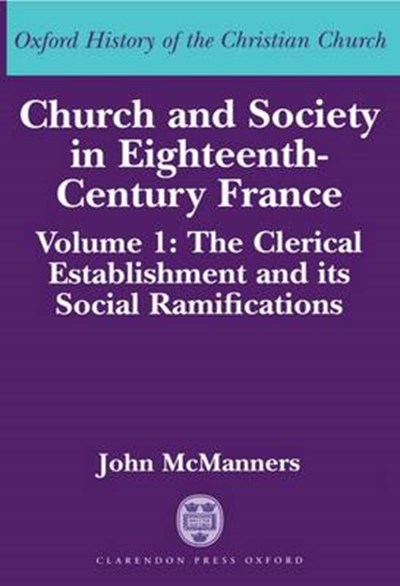 Church and Society in Eighteenth-Century France: Volume 1: The Clerical Establishment and its Social Ramifications

QTY
Add to Basket
Publisher: Oxford University Press
ISBN: 9780198270034
Number of Pages: 836
Published: 08/07/1999
Width: 15.3 cm
Height: 23 cm
Description Author Information Reviews
This, the first volume, begins with a Section on Church and State, the theology and political theory justifying their alliance, the wealth of the Clergy and their Assemblies voting taxation, their role in the official life of the nation, from the Court at Versailles to army barracks, warships, and prisons. Then comes a presentation of the complex structure of dioceses and parishes, and the vast variety of monastic institutions (where the enjoyment of misapplied wealth contrasted with the austere dedication which ensured the education of the children and the care of the sick throughout the land). There is an evocation of the life-style of the clergy from the palaces of the aristocratic bishops and the cathedral closes of comfortable canons to the humblest tumbledown nunnery, with a gallery of portraits analysing clerical motives and vocations. A multitude of lay folk come onto the scene, aristocrats battening on monastic revenues, lawyers threading the labyrinth of benefice law, estate managers, musicians, vergers and officials of every kind; many families' whole way of existence was postulated on the assumption of the availability of ecclesiastical offices for their children-the differential privileges of the classes in the hierarchy of society being reflected in an institution devoted to spiritual and unworldly ends.

This is his magnum opus, the culmination of 40 years work.

This massive two-volume work contained the fruits of over 50 years of research, and is a definitive book that will last as long as the subject is studied. It is, as Professor William Doyle has observed, the best book written by an Englishman on the French ancien regime. Nigel Aston, The Guardian The massive two volumes ... must represent one of the most notable works ever published by a scholar in his eighties. Robin Briggs, The Independent ...magisterial... The Times With a prodigious range of often hilarious examples McManners shows how the presence and influence of the Church were to be found nearly everywhere ... No author could come closer to empathizing with the mindset of eighteenth-century French clergy ... a major triumph and advance of scholarship. It shows beyond argument the interest and importance of the French Church, hitherto undervalued by nearly all historians, by demonstrating that eighteenth-century ecclesiastical history involves almost all aspects of politics and society ... Like all profound studies, Church and Society in Eighteenth-Century France stimulates thought and comment over a very wide field. The Historical Journal Magisterial two-volume history of the church in eighteenth-century France ... Rarely has history been written with such ease and thoroughness. Professor McManners combines scholarly detachment with sympathy to produce a thoroughly readable history, one that will not be superseded for many a day. Contemporary Review It is rarely that a reviewer has the privilege of reviewing a book that can genuinely be described as a life's work ... a penetrating picture of the Church of the ancien regime ... In the tapestry Professor McManners provides there are many fascinating threads ... Behind McManner's rich narrative lies a wealth of research and reading, as the notes make clear. The judicious balancing of illustrative (and often amusing) anecdote and analysis makes this rounded picture of the Gallican Church of the ancien regime a study that is unlikely to be superseded. Geoffrey Rowell, Church Times