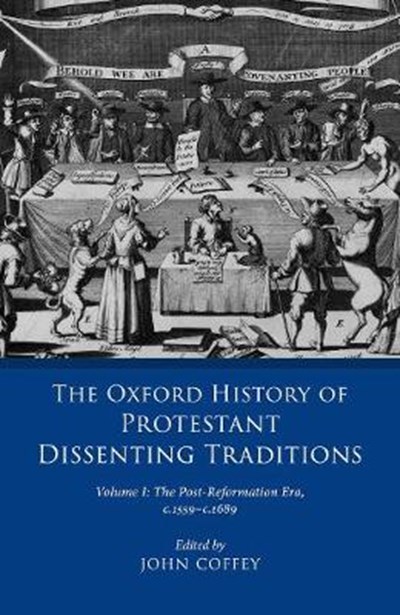 eBook FAQ
Add to Basket
Publisher: Oxford University Press
ISBN: 9780198702238
Number of Pages: 542
Published: 29/05/2020
Width: 16.2 cm
Height: 23.4 cm
Description Author Information Reviews
The Oxford History of Protestant Dissenting Traditions, Volume I traces the emergence of Anglophone Protestant Dissent in the post-Reformation era between the Act of Uniformity (1559) and the Act of Toleration (1689). It reassesses the relationship between establishment and Dissent, emphasising that Presbyterians and Congregationalists were serious contenders in the struggle for religious hegemony. Under Elizabeth I and the early Stuarts, separatists were few in number, and Dissent was largely contained within the Church of England, as nonconformists sought to reform the national Church from within. During the English Revolution (1640-60), Puritan reformers seized control of the state but splintered into rival factions with competing programmes of ecclesiastical reform. Only after the Restoration, following the ejection of two thousand Puritan clergy from the Church, did most Puritans become Dissenters, often with great reluctance. Dissent was not the inevitable terminus of Puritanism, but the contingent and unintended consequence of the Puritan drive for further reformation. The story of Dissent is thus bound up with the contest for the established Church, not simply a heroic tale of persecuted minorities contending for religious toleration. Nevertheless, in the half century after 1640, religious pluralism became a fact of English life, as denominations formed and toleration was widely advocated. The volume explores how Presbyterians, Congregationalists, Baptists, and Quakers began to forge distinct identities as the four major denominational traditions of English Dissent. It tracks the proliferation of Anglophone Protestant Dissent beyond England-in Wales, Scotland, Ireland, the Dutch Republic, New England, Pennsylvania, and the Caribbean. And it presents the latest research on the culture of Dissenting congregations, including their relations with the parish, their worship, preaching, gender relations, and lay experience.

John Coffey is Professor of Early Modern History at the University of Leicester. He has published widely on the history of Protestantism in Britain and America, and is the author of Persecution and Toleration in Protestant England, 1558-1689 (2000), and Exodus and Liberation: Deliverance Politics from John Calvin to Martin Luther King Jr. (2014). He co-edited The Cambridge Companion to Puritanism (2008), and has worked with N.H. Keeble, Tom Charlton, and Tom Cooper on a scholarly edition of Richard Baxter's Reliquiae Baxterianae, 5 vols (Oxford, 2020).