Thomas of Edessa's Explanations of the Nativity and Epiphany 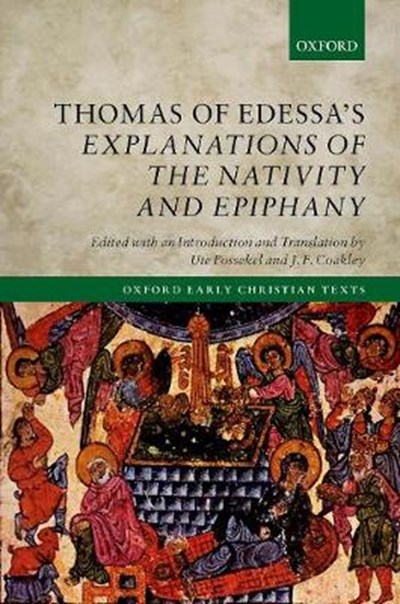 Thomas of Edessa's Explanations of the Nativity and Epiphany

QTY
Add to Basket
Publisher: Oxford University Press
ISBN: 9780198724070
Number of Pages: 272
Published: 06/05/2021
Width: 16.5 cm
Height: 24 cm
Description Author Information Reviews
Thomas of Edessa flourished as a teacher at the School of Nisibis, an important Christian intellectual centre in sixth-century Persia. He accompanied the later patriarch Mar Aba on his travels around the Mediterranean and followed him to Nisibis. Thomas's only surviving writings are two lectures in Syriac ('Explanations') on the feasts of the Nativity and Epiphany. These discourses were later incorporated into a collection of Explanations of the Feasts covering the whole ecclesiastical year. This volume presents an edition of Thomas of Edessa's Syriac text of Nativity and Epiphany, accompanied by a facing-page English translation. These discourses, with the editors' introduction and notes, elucidate Thomas's place in the theological development of the Church of the East. He is the earliest author after Narsai to draw extensively upon the theology of Theodore of Mopsuestia, but earlier Syriac traditions are also reflected in his work, and his Christology is not yet the doctrine characteristic of Babai and later East Syriac authors.

Ute Possekel is Lecturer on Syriac at Harvard Divinity School. J. F. Coakley was formerly Senior Lecturer in the Department of Religious Studies at Lancaster University.