Pastors, Congregations, and the Experience of Dissent in Seventeenth-Century England 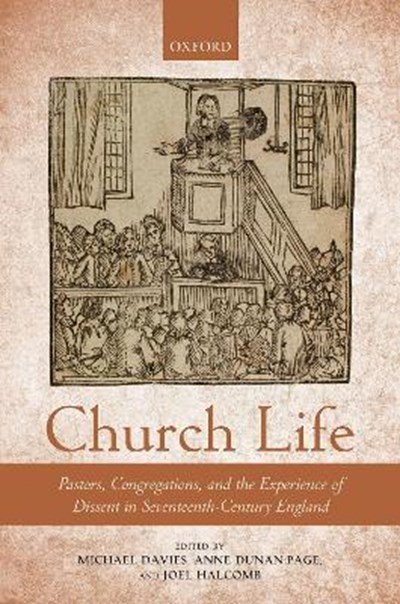 Pastors, Congregations, and the Experience of Dissent in Seventeenth-Century England

eBook FAQ
Add to Basket
Publisher: Oxford University Press
ISBN: 9780198753193
Number of Pages: 242
Published: 21/05/2019
Width: 16.1 cm
Height: 24 cm
Description Author Information Reviews
Church Life: Pastors, Congregations, and the Experience of Dissent in Seventeenth-Century England addresses the rich, complex, and varied nature of 'church life' experienced by England's Baptists, Congregationalists, and Presbyterians during the seventeenth century. Spanning the period from the English Revolution to the Glorious Revolution, and beyond, the contributors examine the social, political, and religious character of England's 'gathered' churches and reformed parishes: how pastors and their congregations interacted; how Dissenters related to their meetings as religious communities; and what the experience of church life was like for ordinary members as well as their ministers, including notably John Owen and Richard Baxter alongside less well-known figures, such as Ebenezer Chandler. Moving beyond the religious experience of the solitary individual, often exemplified by conversion, Church Life redefines the experience of Dissent, concentrating instead on the collective concerns of a communally-centred church life through a wide spectrum of issues: from questions of liberty and pastoral reform to matters of church discipline and respectability. With a substantial introduction that puts into context the key concepts of 'church life' and the 'Dissenting experience', the contributors offer fresh ways of understanding Protestant Dissent in seventeenth-century England: through differences in ecclesiology and pastoral theory, and via the buildings in which Dissent was nurtured to the building-up of Dissent during periods of civil war, persecution, and revolution. They draw on a broad range of printed and archival materials: from the minutes of the Westminster Assembly to the manuscript church books of early Dissenting congregations.

Michael Davies is Senior Lecturer in English at the University of Liverpool. Among his publications is Graceful Reading: Theology and Narrative in the Works of John Bunyan (2002). He is co-editor of The Oxford Handbook of John Bunyan (with W. R. Owens; 2018). Anne Dunan-Page is Professor of Early Modern British Studies at Aix-Marseille Universite, where she directs the Research Centre on the Anglophone World. Her books include Grace Overwhelming: John Bunyan, 'The Pilgrim's Progress' and the Extremes of the Baptist Mind (2006), The Cambridge Companion to Bunyan (2010), and Roger L'Estrange and the Making of Restoration Culture (with Beth Lynch; 2008). Joel Halcomb is Lecturer in Early Modern History at the University of East Anglia. He was assistant editor for The Minutes and Papers of the Westminster Assembly, 1643-1652 (2012).