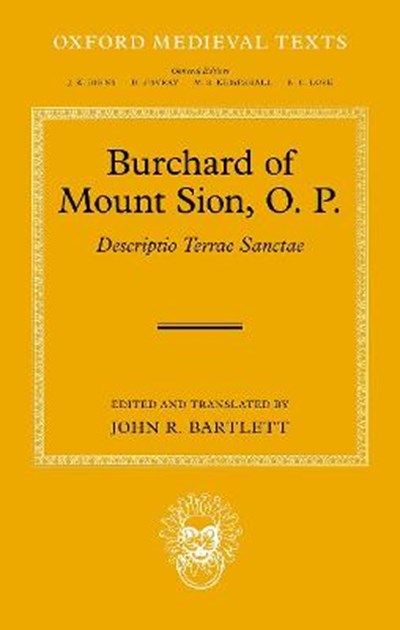 QTY
Add to Basket
Publisher: Oxford University Press
ISBN: 9780198789512
Number of Pages: 528
Published: 16/05/2019
Width: 14.5 cm
Height: 22.2 cm
Description Author Information Reviews
In his 'Description of the Holy Land', written in Latin around 1283, the Dominican Burchard explores the land in a series of itineraries starting from Acre in the north, and then from Jerusalem in the south. His particular concern is to identify and describe towns and other sites mentioned in the Bible as an aid to pilgrims and biblical scholars. He treated the evidence of the Bible and other sources carefully, he used the evidence of place-names preserved from antiquity, and he knew the land from personal observation, not simply from the writings of his predecessors. His identifications (e.g., of Dan and Beersheba) are not always supported by modern archaeological evidence, but he understood the importance of it, as shown by his explanation of the survival below ground level of early Christian sites, and his discussion of the site of ancient Jerusalem. Burchard's work exists in both a longer and a shorter, abbreviated, version. This book contains the Latin texts, drawn from selected manuscripts, complete with apparatus criticus, and translations of both versions. Introductory chapters cover what is known of Burchard and his career, the manuscript evidence for his two versions of the Descriptio and their relationship, an account of the different printed editions of Burchard's work, a study of his presentation of the geography of the land, and a discussion of early maps showing knowledge of his work. Further chapters explore the churches visited by Burchard, and his use of scripture and other written sources. Burchard names over four hundred places; the identification of biblical places is central to his work. Consistency in the spelling of biblical place-names deriving from ancient Hebrew or Greek and handed down via Latin, Arabic, and through many biblical translations in different languages, is well-nigh impossible. This book includes a list of the Latin names used by Burchard, together with their English equivalents as commonly used by modern scholars, and also as found in the historical maps of the Atlas of Israel (2nd edition, 1970). Palestine Grid coordinates have been added for ease of precise location on the map. Eight maps have been included to illustrate Burchard's knowledge of the Holy Land and the Egypt described in his final chapters.

John R. Bartlett was educated at Bury Grammar School and Brasenose College, Oxford, and held a number of positions at Trinity College, Dublin throughout his teaching career. He was Principal of the Church of Ireland Theological College from 1989 until his retirement in 2001. He was President of the Society for Old Testament Study in 2002, and a Member of the Royal Irish Academy in 2005. He worked as a site supervisor on K. M. Kenyon's excavations in Jerusalem in 1962, on C. M. Bennett's excavations in Buseirah, Jordan in 1973 and 1974, and as a member of J. M. Miller's survey of the Kerak Plateau, Jordan in 1979 and 1982. Bartlett's academic publications have mostly been concerned with the history and geography of kingdoms in Jordan in biblical times, and with the Maccabaean period, with particular interest in the identification of biblical sites.