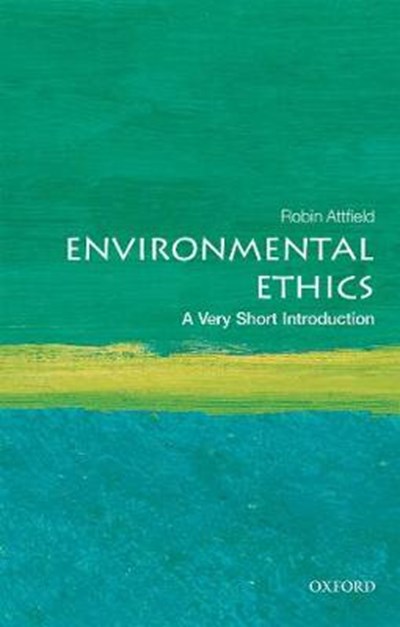 QTY
Add to Basket
Publisher: Oxford University Press
ISBN: 9780198797166
Number of Pages: 160
Published: 13/12/2018
Width: 11.5 cm
Height: 17.6 cm
Description Author Information Reviews
Environmental ethics is a relatively new branch of philosophy, which studies the values and principles involved in combatting environmental problems such as pollution, loss of species and habitats, and climate change. As our environment faces evermore threats from human activities these core issues are becoming increasingly important. In this Very Short Introduction Robin Attfield traces the origins of environmental ethics as a discipline, and considers how it defends the independent value of living creatures, and the need to make decisions informed by the needs and interests of future generations. Exploring the diverse approaches to ethical decisions and judgements, he highlights the importance of making processes of production and consumption sustainable and of addressing human population levels, together with policies for preserving species, sub-species, and their habitats. Along the way Attfield discusses different movements such as Deep Ecology, Social Ecology, the Environmental Justice movement and the Green movement, and also considers the attitudes to the environment of the world's religions, including the approach from the major religions and the contributions of the indigenous religions of Asia, Africa and North America. Analysing the current threat of climate change, and proposals for climate engineering, he demonstrates how responsibility for the environment ultimately lies with us all, from states and corporations to individuals, and emphasises how concerted action is required to manage our environment ethically and sustainably. ABOUT THE SERIES: The Very Short Introductions series from Oxford University Press contains hundreds of titles in almost every subject area. These pocket-sized books are the perfect way to get ahead in a new subject quickly. Our expert authors combine facts, analysis, perspective, new ideas, and enthusiasm to make interesting and challenging topics highly readable.

Robin Attfield was appointed Lecturer in Philosophy at (what is now) Cardiff University in 1968, and became a Professor in 1991. He has participated in the Environmental Ethics Working Party of UNESCO, and has served on the Council of the Royal Institute of Philosophy and on the Committee of 0he Aristotelian Society. Robin is the author of sixteen books, including The Ethics of Environmental Concern (1983 and 1991), Ethics: An Overview (2012), The Ethics of the Global Environment (1999 and 2015), and Wonder, Value and God (2017), and has contributed to several journals.