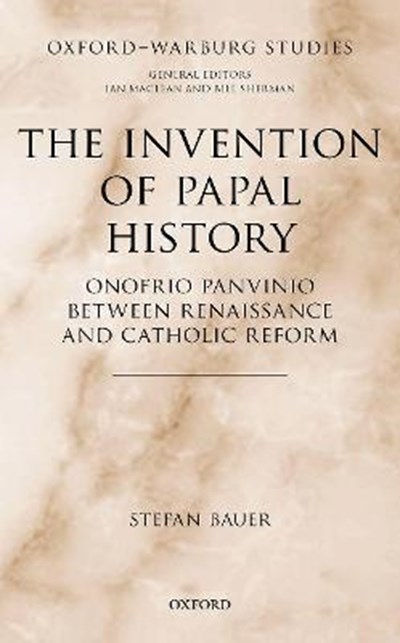 eBook FAQ
Add to Basket
Publisher: Oxford University Press
ISBN: 9780198807001
Number of Pages: 276
Published: 16/12/2019
Width: 14.5 cm
Height: 21.8 cm
Description Author Information Reviews
How was the history of post-classical Rome and of the Church written in the Catholic Reformation? Historical texts composed in Rome at this time have been considered secondary to the city's significance for the history of art. The Invention of Papal History corrects this distorting emphasis and shows how historical writing became part of a comprehensive formation of the image and self-perception of the papacy. By presenting and fully contextualising the path-breaking works of the Augustinian historian Onofrio Panvinio (1530-1568), Stefan Bauer shows what type of historical research was possible in the late Renaissance and the Catholic Reformation. Crucial questions were, for example: How were the pontiffs elected? How many popes had been puppets of emperors? Could any of the past machinations, schisms, and disorder in the history of the Church be admitted to the reading public? Historiography in this period by no means consisted entirely of commissioned works written for patrons; rather, a creative interplay existed between, on the one hand, the endeavours of authors to explore the past and, on the other hand, the constraints of ideology and censorship placed on them. The Invention of Papal History sheds new light on the changing priorities, mentalities, and cultural standards that flourished in the transition from the Renaissance to the Catholic Reformation.

Stefan Bauer (PhD, Warburg Institute) is a Lecturer in Early Modern History at Royal Holloway, University of London. He is an intellectual and cultural historian of early modern Europe; his research interests cover humanism, religious polemic, church history, and censorship. Bauer is also a Research Associate at the Centre for Renaissance and Early Modern Studies, University of York, a Privatdozent at the University of Fribourg, and a Fellow of the Royal Historical Society. He previously held positions as a Lecturer in Early Modern History and Marie Curie Fellow in York (2015-2018), and as a Research Fellow both at the German Historical Institute in Rome, and the Italian-German Historical Institute in Trent. His previous publications include The Censorship and Fortuna of Platina's Lives of the Popes in the Sixteenth Century (2006) and Polisbild und Demokratieverstandnis in Jacob Burckhardts Griechischer Kulturgeschichte (The Idea of the Polis and the Conception of Democracy in Jacob Burckhardt's History of Greek Civilization) (2001).