It Keeps Me Seeking

The Invitation from Science, Philosophy and Religion 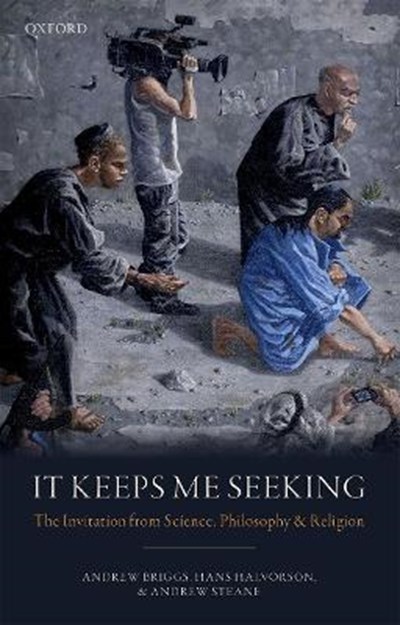 It Keeps Me Seeking

The Invitation from Science, Philosophy and Religion

QTY
Add to Basket
Publisher: Oxford University Press
ISBN: 9780198808282
Published: 27/09/2018
Description Author Information Reviews
Here is a fresh look at how science contributes to the bigger picture of human flourishing, through a collage of science and philosophy, richly illustrated by the authors' own experience and personal reflection. They survey the territory of fundamental physics, machine learning, philosophy of human identity, evolutionary biology, miracles, arguments from design, naturalism, the history of ideas, and more. The natural world can be appreciated not only for itself, but also as an eloquent gesture, a narrative and a pointer beyond itself. Our human journey is not to a theorem or a treatise, but to a meeting which encompasses all our capacities. In this meeting, science is the means to find out about the structure of the physical world of which we are a part, not a means to reduce ourselves and our fellow human beings to mere objects of scrutiny, and still less a means to attempt the utterly futile exercise of trying to do that to God. We have intellectual permission to be open to the notion that God can be trusted and known. The material world encourages an open-hearted reaching out to something more, with a freedom to seek and to be received by what lies beyond the scope of purely impersonal descriptions and attitudes.

Andrew Briggs was elected in 2002 as the first holder of the newly created Chair in Nanomaterials at the University of Oxford. After studying physics at Oxford he gained a PhD at the Cavendish Laboratory in Cambridge, he then studied for a degree in Theology at Cambridge, winning the Chase Prize for Greek, before returning to Oxford in 1980 to pursue an academic career in science. His research interests focus on nanomaterials for quantum technologies and their incorporation into practical devices. Hans Halvorson is Stuart Professor of Philosophy at Princeton University. He has written extensively on philosophical issues in physics and the other sciences, on mathematical logic, and on the relationship between science and religion. He received the Mellon New Directions in the Humanities Fellowship (2008), the Cushing Memorial Prize in the History and Philosophy of Physics (2004), Best Article of the Year by a Recent Ph.D. (Philosophy of Science Association, 2001), and Ten Best Philosophy Articles of the Year (The Philosopher's Annual, both 2001 and 2002). Andrew Steane is a Physics Professor at Oxford University. His research is in fundamental physics. This includes experimental laser cooling and manipulation of atoms, quantum information theory and computing, and some aspects of relativity and thermal physics. From 1995-1999 he was a Royal Society University Research Fellow, based at the University of Oxford, and a Fellow by Special Election of St Edmund Hall, Oxford (1996-1999). In 1999 he became a University Lecturer and Tutorial Fellow in Physics of Exeter College, Oxford. He was awarded the Maxwell Medal and Prize of the Institute of Physics in 2000 for the discovery of quantum error correction. He has written two textbooks and two books for a wider readership.