The Fragments, Testimonia, and Reception of a Second-Century Commentator 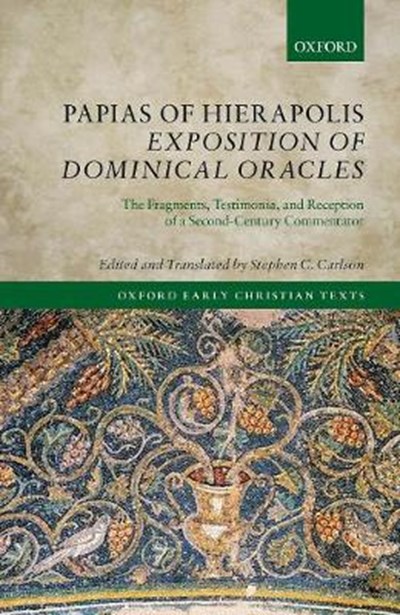 The Fragments, Testimonia, and Reception of a Second-Century Commentator

QTY
Add to Basket
Publisher: Oxford University Press
ISBN: 9780198811602
Number of Pages: 400
Published: 24/06/2021
Width: 16 cm
Height: 24 cm
Description Author Information Reviews
This work is the most complete edition of the remains of the lost five-volume work, Exposition of Dominical Oracles, by Papias of Hierapolis, a second-century Christian commentator. In all, some ninety-eight separate mentions of Papias and his work are documented, from the second century to the age of printing in the fifteenth century, both in their original language and in English translation. This body of evidence is scattered over fourteen centuries across fifty-seven different authors writing in five different languages (Greek, Latin, Syriac, Arabic, and Armenian). This edition adopts the distinction between his fragments proper, for what we know of his work, and the testimonia, for what we know of his reception. In addition to these, Stephen C. Carlson provides a list of potential citations of Papias, potential uses of Papias, and fragments falsely attributed to Papias. The volume features an extensive introduction treating the most important instances of reception of Papias and his work.

Stephen C. Carlson is Senior Research Fellow at the Australian Catholic University's Institute for Religion and Critical Inquiry. He holds a PhD from Duke University, and spent two years at Uppsala University in Sweden as Postdoctoral Research Fellow in Pre-Constantinian Christianity.