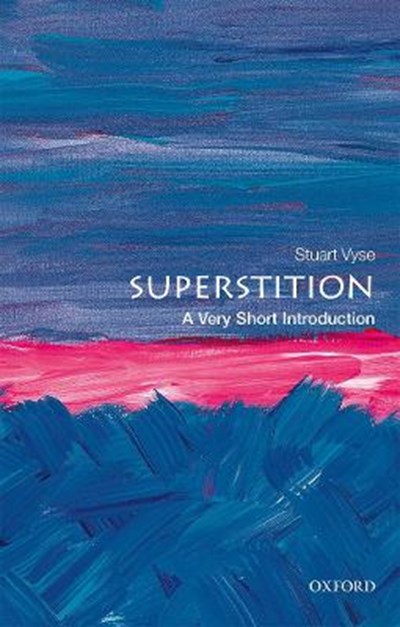 QTY
Add to Basket
Publisher: Oxford University Press
ISBN: 9780198819257
Number of Pages: 168
Published: 23/01/2020
Width: 11 cm
Height: 16.9 cm
Description Author Information Reviews
Do you touch wood for luck, or avoid hotel rooms on floor thirteen? Would you cross the path of a black cat, or step under a ladder? Is breaking a mirror just an expensive waste of glass, or something rather more sinister? Despite the dominance of science in today's world, superstitious beliefs - both traditional and new - remain surprisingly popular. A recent survey of adults in the United States found that 33 percent believed that finding a penny was good luck, and 23 percent believed that the number seven was lucky. Where did these superstitions come from, and why do they persist today? This Very Short Introduction explores the nature and surprising history of superstition from antiquity to the present. For two millennia, superstition was a label derisively applied to foreign religions and unacceptable religious practices, and its primary purpose was used to separate groups and assert religious and social authority. After the Enlightenment, the superstition label was still used to define groups, but the new dividing line was between reason and unreason. Today, despite our apparent sophistication and technological advances, superstitious belief and behaviour remain widespread, and highly educated people are not immune. Stuart Vyse takes an exciting look at the varieties of popular superstitious beliefs today and the psychological reasons behind their continued existence, as well as the likely future course of superstition in our increasingly connected world. ABOUT THE SERIES: The Very Short Introductions series from Oxford University Press contains hundreds of titles in almost every subject area. These pocket-sized books are the perfect way to get ahead in a new subject quickly. Our expert authors combine facts, analysis, perspective, new ideas, and enthusiasm to make interesting and challenging topics highly readable.

Stuart Vyse is a behavioral scientist, teacher, and writer. He holds PhD and MA degrees in psychology and BA and MA degrees in English Literature. He taught at Providence College, the University of Rhode Island, and Connecticut College, where he was Joanne Toor Cummings '50 Professor. Vyse has written two books: Believing in Magic: The Psychology of Superstition (OUP, 1997), which won the 1999 William James Book Award of the American Psychological Association, and Going Broke: Why Americans Can't Hold on to Their Money, an analysis of the current epidemic of personal debt, the second edition of which (Going Broke: Why Americans (Still) Can't Hold on to Their Money) is due to publish in 2018. He has written dozens of personal essays, most of which have appeared as op-eds in various newspapers and online publications, and he is a Fellow of the Committee for Skeptical Inquiry.