Christian Radicalism in the Church of England and the Invention of the British Sixties, 1957-1970

The Hope of a World Transformed 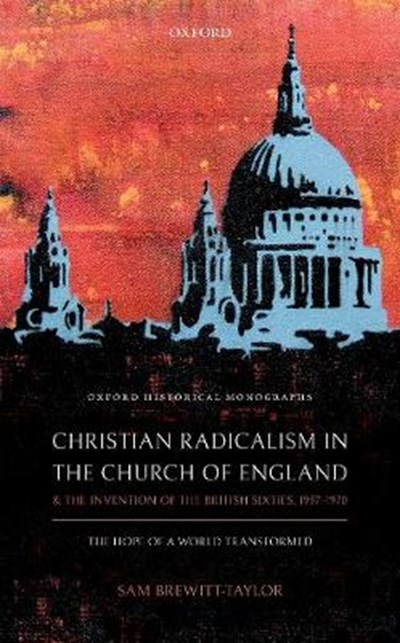 Christian Radicalism in the Church of England and the Invention of the British Sixties, 1957-1970

The Hope of a World Transformed

QTY
Add to Basket
Publisher: Oxford University Press
ISBN: 9780198827009
Number of Pages: 288
Published: 12/09/2018
Width: 14.3 cm
Height: 22.4 cm
Description Author Information Reviews
This study provides the first postsecular account of the moral revolution that Britain experienced in the 1960s. Beginning from the groundbreaking premise that secularity is not a mere absence, but an invented culture, it argues that a new form of British secularity achieved cultural dominance during an abrupt cultural revolution which occurred in the late 1950s and early 1960s. This moral revolution had little to do with affluence or technology, but was most centrally a cultural response to the terrors of the Cold War, which pitted Christian Britain against the secular Soviet Union. By exploring contemporary prophecies of the inevitable arrival of 'the secular society', Sam Brewitt-Taylor shows that, ironically, British secularity was given decisive initial momentum by theologically radical Christians, who destigmatized the idea of 'modern secularity' and made it available for appropriation by a wide range of Sixties actors. Further than this, radical Christians played a significant contributory role in deciding what kind of secularity Britain's Sixties would adopt, by narrating Britain's moral revolution as globalist, individualist, anti-authoritarian, sexually libertarian, and politically egalitarian. In all these ways, radical Christians played a highly significant role in the early stages of Britain's Sixties.

Sam Brewitt-Taylor is Darby Fellow in Modern History at Lincoln College, Oxford, where he teaches British and European history since 1815, and researches moral change in mid-twentieth-century Britain. He studied at Oxford, where he gained BA (2007), MSt (2008), and DPhil degrees (2013). His first article, about the idea of 'secularization' in 1960s Britain, won the 2012 Duncan Tanner prize, awarded by Twentieth Century British History. An overview of his work is available from www.sambrewitt-taylor.com.