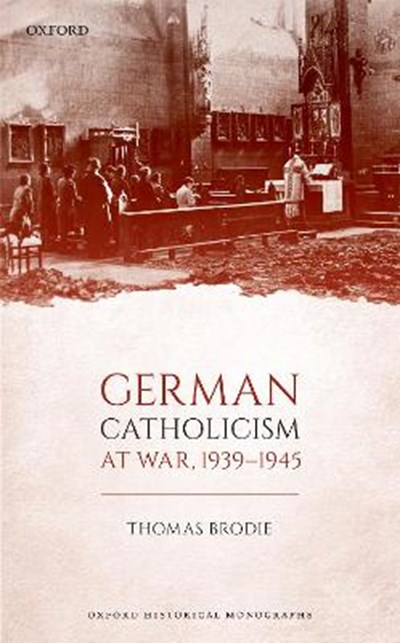 eBook FAQ
Add to Basket
Publisher: Oxford University Press
ISBN: 9780198827023
Number of Pages: 288
Published: 30/10/2018
Width: 15 cm
Height: 22 cm
Description Author Information Reviews
German Catholicism at War explores the mentalities and experiences of German Catholics during the Second World War. Taking the German Home Front, and most specifically, the Rhineland and Westphalia, as its core focus German Catholicism at War examines Catholics' responses to developments in the war, their complex relationships with the Nazi regime, and their religious practices. Drawing on a wide range of source materials stretching from personal letters and diaries to pastoral letters and Gestapo reports, Thomas Brodie breaks new ground in our understanding of the Catholic community in Germany during the Second World War.

Thomas Brodie took his BA, MSt, and Doctoral degrees at Hertford College, Oxford, between 2006 and 2014. He was senior scholar of the college during the academic years 2010-2012, and fully funded by the AHRC during his doctoral career. He held a Hanseatic Scholarship at the Centre for Contemporary Historical Research in Potsdam in 2013/14, and taught at the University of Leeds in 2014/15. From 2015-18 he held a three-year post as a Departmental Lecturer at Jesus College, Oxford, before joining the University of Birmingham in September 2018 as a Lecturer in 20th Century European History. His unpublished doctoral thesis, 'For Christ and Germany': German Catholicism and the Second World War, was officially commended by the judges of the Wiener Library's Fraenkel Prize in 2014.