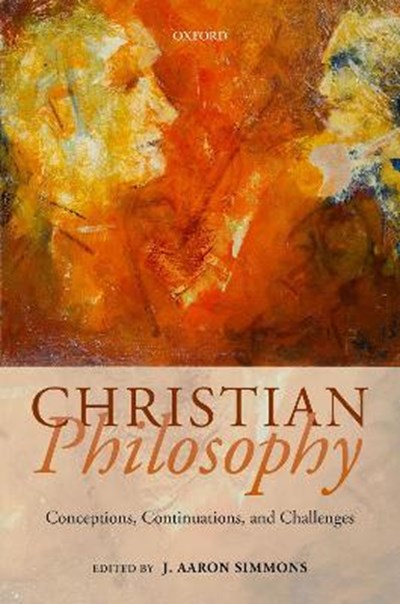 eBook FAQ
Add to Basket
Publisher: Oxford University Press
ISBN: 9780198834106
Number of Pages: 336
Published: 14/12/2018
Width: 16.6 cm
Height: 24 cm
Description Author Information Reviews
One of the marks of being a philosopher is participating in debates about what counts as "philosophy." Of particular note in such debates is the question of how to distinguish philosophy from theology. Although a variety of answers to this question have been offered in the history of philosophy, in recent decades, the prominence of Christian philosophy has been heralded by many as a genuine triumph over the problematic narrowness of strong foundationalism, positivism, and scientism. For others, however, it signals that philosophy continues to risk being replaced by confessional theology. Wherever one comes down on such issues, and however one interprets recent trends in philosophy of religion, the idea of Christian philosophy continues to present pressing questions for those working in meta-philosophy, epistemology, metaphysics, hermeneutics, and value theory. In this volume, established scholars representing a variety of cultural traditions, religious perspectives, and philosophical priorities all wrestle with how the idea of Christian philosophy should be understood, appropriated, and engaged in light of where philosophy is and where it is likely to go. The volume includes classical essays that have deeply marked the field and also new essays that explore the relevance of Christian philosophy to issues in disability studies, engaged pedagogy, lived phenomenology, the academic study of religion, and the workings of social power. Rather than offer a unified view that seeks to settle things, the contributors demonstrate that Christian philosophy remains a topic of lively debate. Wherever one comes down on the issues considered here, this volume shows that Christian philosophy is neither merely of historical interest, nor of interest only to Christians, but instead remains a thoroughly philosophical topic worthy of serious consideration and substantive critique. With a Foreword by Nicholas Wolterstorff, Noah Porter Professor Emeritus of Philosophical Theology at Yale University; Senior Research Fellow in the Institute for Advanced Studies in Culture at the University of Virginia; and Honorary Professor of Australian Catholic University.

J. Aaron Simmons is Associate Professor of Philosophy at Furman University. Working primarily in philosophy of religion and political philosophy, Simmons has published widely on issues concerning phenomenology, existentialism, religious existence, and democratic society and is the author of God and the Other: Ethics and Politics After the Theological Turn (2011), co-author of The New Phenomenology: A Philosophical Introduction (with Bruce Ellis Benson; 2013), and co-editor of Kierkegaard's God and the Good Life (with Michael Strawser and Stephen Minister; 2017), Contemporary Debates in Negative Theology and Philosophy (with Nahum Brown; 2017), Phenomenology for the Twenty-First Century (with J. Edward Hackett; 2016), Reexamining Deconstruction and Determinate Religion (with Stephen Minister; 2012), and Kierkegaard and Levinas: Ethics, Politics, and Religion (with David Wood; 2008).