From Moral Theology to Moral Philosophy

Cicero and Visions of Humanity from Locke to Hume 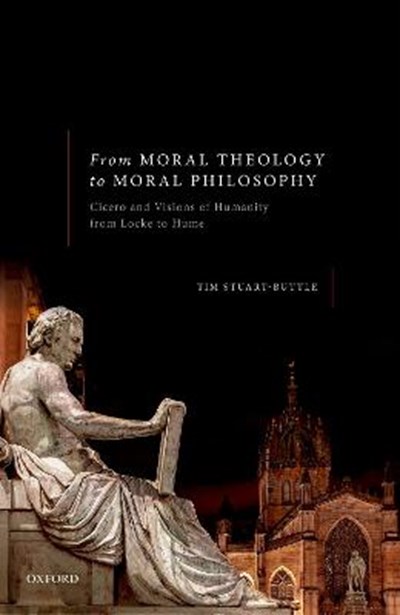 From Moral Theology to Moral Philosophy

Cicero and Visions of Humanity from Locke to Hume

eBook FAQ
Add to Basket
Publisher: Oxford University Press
ISBN: 9780198835585
Number of Pages: 288
Published: 02/07/2019
Width: 16 cm
Height: 24 cm
Description Author Information Reviews
The seventeenth and eighteenth centuries represent a period of remarkable intellectual vitality in British philosophy, as figures such as Hobbes, Locke, Hume, and Smith attempted to explain the origins and sustaining mechanisms of civil society. Their insights continue to inform how political and moral theorists think about the world in which we live. From Moral Theology to Moral Philosophy reconstructs a debate which preoccupied contemporaries but which seems arcane to us today. It concerned the relationship between reason and revelation as the two sources of mankind's knowledge, particularly in the ethical realm: to what extent, they asked, could reason alone discover the content and obligatory character of morality? This was held to be a historical, rather than a merely theoretical question: had the philosophers of pre-Christian antiquity, ignorant of Christ, been able satisfactorily to explain the moral universe? What role had natural theology played in their ethical theories - and was it consistent with the teachings delivered by revelation? Much recent scholarship has drawn attention to the early-modern interest in two late Hellenistic philosophical traditions - Stoicism and Epicureanism. Yet in the English context, three figures above all - John Locke, Conyers Middleton, and David Hume - quite deliberately and explicitly identified their approaches with Cicero as the representative of an alternative philosophical tradition, critical of both the Stoic and the Epicurean: academic scepticism. All argued that Cicero provided a means of addressing what they considered to be the most pressing question facing contemporary philosophy: the relationship between moral philosophy and moral theology.

Tim Stuart-Buttle is Lecturer in Politics at the University of York and a member of the Leverhulme Trust-funded project, Rethinking Civil Society: History, Theory, Critique. Prior to this, he held a postdoctoral research associateship at the University of Cambridge. He has published articles in journals including Locke Studies, History of Political Thought and Political Theory, and essays in collected volumes including The Cambridge Companion to Edward Gibbon (Cambridge 2018). He is the co-editor, with Subha Mukherji, of Literature, Belief, and Knowledge in Early Modern England: Knowing Faith (Palgrave Macmillan 2018).