Dividing the Text of Scripture in Codex Vaticanus and Its Predecessors 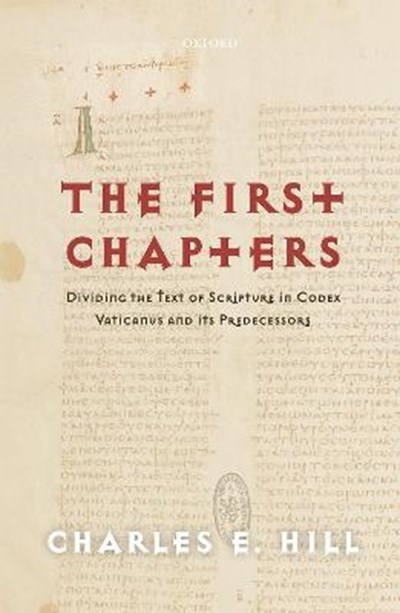 Dividing the Text of Scripture in Codex Vaticanus and Its Predecessors

eBook FAQ
Add to Basket
Publisher: Oxford University Press
ISBN: 9780198836025
Number of Pages: 512
Published: 25/01/2022
Width: 16.4 cm
Height: 24 cm
Description Author Information Reviews
The First Chapters uncovers the origins of the first paragraph or chapter divisions in copies of the Christian Scriptures. Its focal point is the magnificent, fourth-century Codex Vaticanus (Vat.gr. 1209; B 03), perhaps the single most significant ancient manuscript of the Bible, and the oldest material witness to what may be the earliest set of numbered chapter divisions of the Bible. The First Chapters tells the history of textual division, starting from when copies of Greek literary works used virtually no spaces, marks, or other graphic techniques to assist the reader. It explores the origins of other numbering systems, like the better-known Eusebian Canons, but its theme is the first set of numbered chapters in Codex Vaticanus, what nineteenth-century textual critic Samuel P. Tregelles labelled the Capitulatio Vaticana. It demonstrates that these numbers were not, as most have claimed, late additions to the codex but belonged integrally to its original production. The First Chapters then breaks new ground by showing that the Capitulatio Vaticana has real precursors in some much earlier manuscripts. It thus casts light on a long, continuous tradition of scribally-placed, visual guides to the reading and interpreting of Scriptural books. Finally, The First Chapters exposes abundant new evidence that this early system for marking the sense-divisions of Scripture has played a much greater role in the history of exegesis than has previously been imaginable.

Charles E. Hill is Emeritus Professor of New Testament and Early Christianity at the Reformed Theological Seminary in Orlando, US. He spent five years as an Assistant Professor of Religion at Northwestern College, Orange City, IA, (1989-94), and served as Associate Professor and then as John R. Richardson Professor of New Testamant and Early Christianity at Reformed Theological Seminary. He received a Lilly Research Grants Faculty Fellowship in 2000-2001 and was made a Henry Luce III Foundation Faculty Fellow in Theology for 2012.