Resurrection of the Dead in Early Judaism, 200 BCE-CE 200 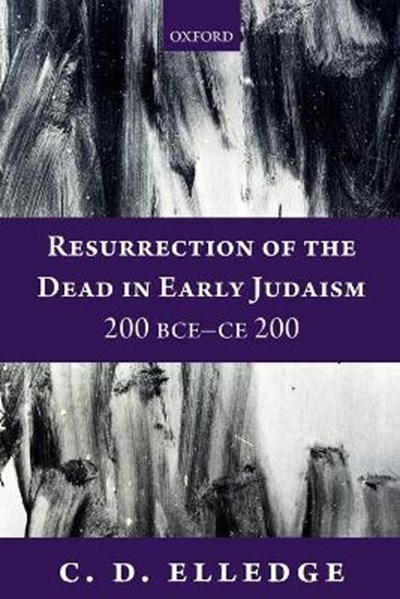 Resurrection of the Dead in Early Judaism, 200 BCE-CE 200

QTY
Add to Basket
Publisher: Oxford University Press
ISBN: 9780198844099
Number of Pages: 272
Published: 07/05/2019
Width: 16.1 cm
Height: 23.4 cm
Description Author Information Reviews
Resurrection of the dead represents one of the more enigmatic beliefs of Western religions to many modern readers. In this volume, C. D. Elledge offers an interpretation of some of the earliest literature within Judaism that exhibits a confident hope in resurrection. He not only aids the study of early Jewish literature itself, but expands contemporary knowledge of some of the earliest expressions of a hope that would become increasingly meaningful in later Judaism, Christianity, and Islam. Elledge focuses on resurrection in the latest writings of the Hebrew Bible, the Apocrypha, Pseudepigrapha, Dead Sea Scrolls, as well as the writings of other Hellenistic Jewish authors. He also incorporates later rabbinic writings, early Christian sources, and inscriptions, as they shed additional light upon select features of the evidence in question. This allows for a deeper look into how particular literary works utilized the discourse of resurrection, while also retaining larger comparative insights into what these materials may teach us about the gradual flourishing of resurrection within its early Jewish environment. Individual chapters balance a more categorical/comparative approach to the problems raised by resurrection (definitions, diverse conceptions, historical origins, strategies of legitimation) with a more specific focus on particular pieces of the early Jewish evidence (1 Enoch, Dead Sea Scrolls, Josephus). Resurrection of the Dead in Early Judaism, 200 BCE-CE 200 provides a treatment of resurrection that informs the study of early Jewish theologies, as well as their later reinterpretations within Rabbinic Judaism and Christianity.

C. D. Elledge is Associate Professor of Religion at Gustavus Adolphus College in Saint Peter, Minnesota, where he teaches courses in New Testament and Early Jewish literature. After completing his Ph.D. from Princeton Theological Seminary, Elledge served as a Fulbright Scholar at the Hebrew University Institute of Archaeology and the Ecole Biblique de Jerusalem. His publications include Life after Death in Early Judaism (Mohr Siebeck, 2006), The Bible and the Dead Sea Scrolls (Society of Biblical Literature, 2005), and The Statutes of the King: The Temple Scroll's Legislation on Kingship (Peeters, 2004).