Manuscripts of the Book of Revelation 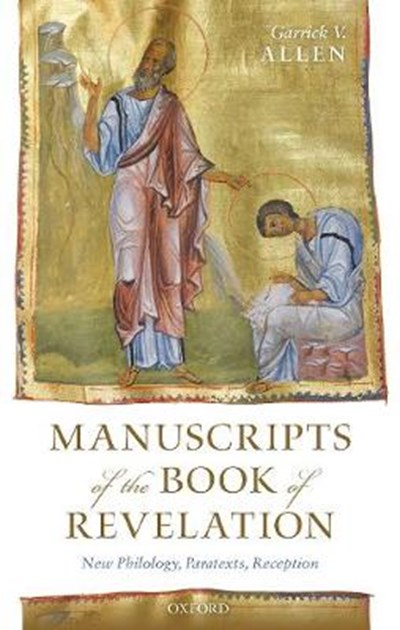 Manuscripts of the Book of Revelation

eBook FAQ
Add to Basket
Publisher: Oxford University Press
ISBN: 9780198849056
Number of Pages: 252
Published: 04/06/2020
Width: 14.5 cm
Height: 22.4 cm
Description Author Information Reviews
The Book of Revelation is a disorienting work, full of beasts, heavenly journeys, holy war, the End of the Age, and the New Jerusalem. It is difficult to follow the thread that ties the visions together and to makes sense of the work's message. In Manuscripts of the Book of Revelation, Garrick Allen argues that one way to understand the strange history of Revelation and its challenging texts is to go back to its manuscripts. The texts of the Greek manuscripts of Revelation are the foundation for the words that we encounter when we read Revelation in a modern Bible. But the manuscripts also tell us what other ancient, medieval, and early modern people thought about the work they copied and read. The paratexts of Revelation-the many features of the manuscripts that help readers to interpret the text-are one important point of evidence. Incorporating such diverse features like the traditional apparatus that accompanies ancient commentaries to the random marginal notes that identify the true identity of the beast, paratexts are founts of information on how other mostly anonymous people interpreted Revelation's problem texts. Allen argues that manuscripts are not just important for textual critics or antiquarians, but that they are important for scholars and serious students because they are the essential substance of what the New Testament is. This book illustrates ways that the manuscripts illuminate surprising answers to important critical questions. We can learn to 'read' the manuscripts even if we don't know the language.

Garrick V. Allen (Phd 2015, St Andrews) is Assistant Professor in New Testament Studies at Dublin City University. His book The Book of Revelation and Early Jewish Textual Culture (Cambridge University Press, 2017) was awarded the 2019 Manfred Lautenschlaeger Award for Theological Promise and he has written many articles on the book of Revelation and manuscripts of the New Testament. He is also the recipient of the 2019 Paul J. Achtemeier Award for New Testament Scholarship awarded by the Society of Biblical Literature.