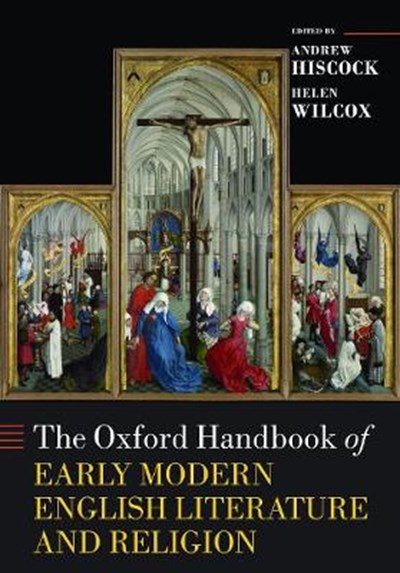 This pioneering Handbook offers a comprehensive consideration of the dynamic relationship between English literature and religion in the early modern period. The sixteenth and seventeenth centuries were the most turbulent times in the history of the British church and, perhaps as a result, produced some of the greatest devotional poetry, sermons, polemics, and epics of literature in English. The early-modern interaction of rhetoric and faith is addressed in thirty-nine chapters of original research, divided into five sections.

The first analyses the changes within the church from the Reformation to the establishment of the Church of England, the phenomenon of puritanism and the rise of non-conformity. The second section discusses ten genres in which faith was explored, including poetry, prophecy, drama, sermons, satire, and autobiographical writings. The middle section focuses on selected individual authors, among them Thomas More, Christopher Marlowe, John Donne, Lucy Hutchinson, and John Milton. Since authors never write in isolation, the fourth section examines a range of communities in which writers interpreted their faith: lay and religious households, sectarian groups including the Quakers, clusters of religious exiles, Jewish and Islamic communities, and those who settled in the new world. Finally, the fifth section considers some key topics and debates in early modern religious literature, ranging from ideas of authority and the relationship of body and soul, to death, judgment, and eternity.

The Handbook is framed by a succinct introduction, a chronology of religious and literary landmarks, a guide for new researchers in this field, and a full bibliography of primary and secondary texts relating to early modern English literature and religion.

Andrew Hiscock is Professor of English Literature at Bangor University. He has published widely on English and French early modern literature. He is a Trustee of the Modern Humanities Research Association and a Fellow of the English Association. He is English literature editor of the journal MLR, series editor of The Yearbook of English Studies and series co-editor of Arden Early Modern Drama Guides. He is a former AHRC research fellow and is a Marie Sklowdowska-Curie Research Fellow at the Research Institute for the Renaissance, the Neo-Classical Age and the Enlightenment at Montpellier 3 University. His most recent monograph is entitled Reading Memory in Early Modern Literature. Helen Wilcox is Professor of English Literature at Bangor University. She has published extensively on early modern English literature, particularly devotional poetry, women's writing, Shakespeare, early autobiography, and the relationships between literature and religion, music, and the visual arts. Her publications include Her Own Life: Autobiographical Writings by Seventeenth-Century Englishwomen (Routledge, 1989), the acclaimed annotated edition of The English Poems of George Herbert (Cambridge, 2007) and 1611: Authority, Gender and the Word in Early Modern England (Wiley-Blackwell, 2014). She has been a visiting professor in Singapore, Spain, and the USA., and is a Fellow of the Royal Society of Literature, the English Association, and the Learned Society of Wales.

...impressive and wide-ranging * Harriet Archer, The English Association * [The Handbook's] opening chronology of key events in political and religious history alongside those of the literary history of the sixteenth and seventeenth centuries provides a helpful orientation for students in particular. * David Parry, The Glass * A work of considerable substance, offering its own richness and depth of thought at the same time that it insistently beckons readers into wider conversations. With thirty-nine essays, the volume furnishes students of the period with many possible points of entry, while the essays themselves present innumerable trajectories for further investigation. Lastly, in an appendix Jesse David Sharpe provides a primer on research methods that supplies useful guidance to those beginning such journeys. * James Ross Macdonald, Modern Language Review * Offers fresh interpretations of a host of topics springing from an incredibly fecund era of religious reflection in English literature, the 16th and 17th centuries . . . Of uniformly high quality, the essays are diverse in terms of methodology and approach. * S. Gowler, CHOICE * The two editors, Andrew Hiscock and Helen Wilcox, should be congratulated for having devised a strategy to explore and present the relevant issues that is as rigorous as it is effective. This book will be an indispensable reference for all good literature or religion libraries. * Commentaire [translated from French] * This is a distinguished volume . . . and a great deal of first class scholarship, and its editors are to be congratulated on their work in bringing it all together. A brief review can barely do it justice, and it deserves to be widely used and read. * David Jasper, Journal of Anglican Studies *