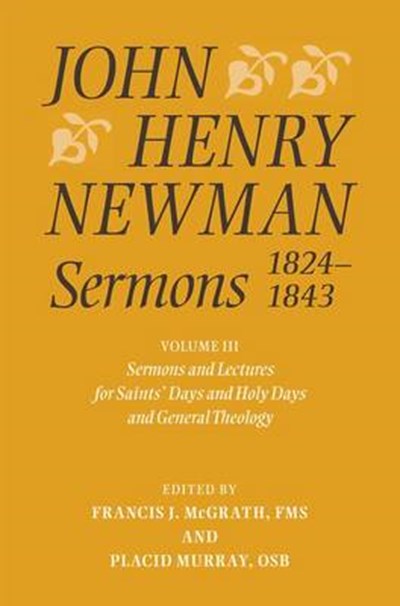 QTY
Add to Basket
Publisher: Oxford University Press
ISBN: 9780199200900
Number of Pages: 484
Published: 11/03/2010
Width: 16.2 cm
Height: 24.1 cm
Description Author Information Reviews
From 1824 to 1843, Newman was an active clergyman of the Church of England. Throughout these twenty years, he entered the pulpit about 1,270 times and wrote about 604 sermons. Of these, he eventually published 217 sermons which he had written and delivered; a further 246 sermons survive in manuscript in the Archives of the Birmingham Oratory, some only as fragments but the majority as full texts. Volume I was published in 1991 and Volume II in 1993. When completed, the series will consist of five volumes. Volume III contains a further fifty hitherto unpublished sermons belonging to this period. There are twenty-five sermons especially composed for Saints' Days and Holy Days and, with one exception, all preached at St Mary the Virgin University Church, Oxford, between 1830 and 1843. Towards the end of 1831, after years of dissatisfaction with his mode of writing and preaching sermons, Newman hit upon a new mode of delivery. There are also twenty-five sermons which Newman categorized as General Theology. They cover such areas as: the Second Coming; the efficacy of prayer; angels; baptismal regeneration; the Trinity, religious mystery; the Creed; and the dogmatic principle. There is also one particular sermon on slavery in which Newman argues that slavery is 'a condition of life ordained by God in the same sense that other conditions of life are'. Since many of these sermons were preached and re-preached several times over this twenty-year period, they are important for an understanding of Newman's theological and spiritual development.

Francis J. McGrath was appointed the editor of Newman's Letters and Diaries in January 2003, following the sudden death of the previous editor, Gerard Tracey. In 2006, he has published Volumes IX and X covering Newman's final years as an Anglican. He had just published Volume XXXII of the series, thus bringing a project to completion which was commenced fifty years ago and is considered to be one of the finest collection of letters in the English language. He is now working on Volume IV of the Anglican Sermons. Dom Placid Murray, OSB, DD is a member of the Benedictine community of Gelnstal Abbey, Co. Limerick. Author of Newman the Oratorian, he has also contributed articles on liturgy to the New Catholic Encyclopaedia and the Encyclopaedia Britannica.