Animal Sacrifice in Ancient Greek Religion, Judaism, and Christianity, 100 BC to AD 200 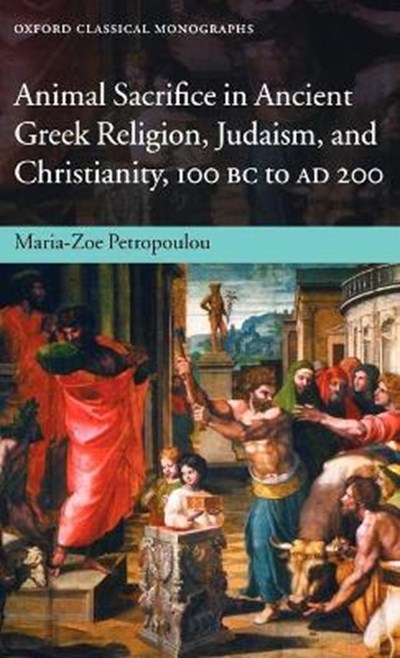 Animal Sacrifice in Ancient Greek Religion, Judaism, and Christianity, 100 BC to AD 200

QTY
Add to Basket
Publisher: Oxford University Press
ISBN: 9780199218547
Number of Pages: 350
Published: 06/03/2008
Width: 14.6 cm
Height: 22.3 cm
Description Author Information Reviews
A study of animal sacrifice within Greek paganism, Judaism, and Christianity during the period of their interaction between about 100 BC and AD 200. After a vivid account of the realities of sacrifice in the Greek East and in the Jerusalem Temple (up to AD 70), Maria-Zoe Petropoulou explores the attitudes of early Christians towards this practice. Contrary to other studies in this area, she demonstrates that the process by which Christianity finally separated its own cultic code from the strong tradition of animal sacrifice was a slow and difficult one. Petropoulou places special emphasis on the fact that Christians gave completely new meanings to the term `sacrifice'. She also explores the question why, if animal sacrifice was of prime importance in the eastern Mediterranean at this time, Christians should ultimately have rejected it.

Maria-Zoe Petropoulou is a teacher on the International Baccalaureate Program of the Hellenic American Foundation, Athens.

Maria-Zoe Petropoulou's book encourages scholars to take seriously the experience of religious sacrifice as encountered by actual worshippers. Cally Hammond, Times Literary Supplement Petropoulou's book is an important contribution to the study of late Hellenistic and early Roman religion, most notably for its demonstration of the continued importance of animal sacrifice in the early imperial period, and its elucidation of early Christian responses to this phenomenon, particularly in the second century. Paul Dilley, Bryn Mawr Classical Review