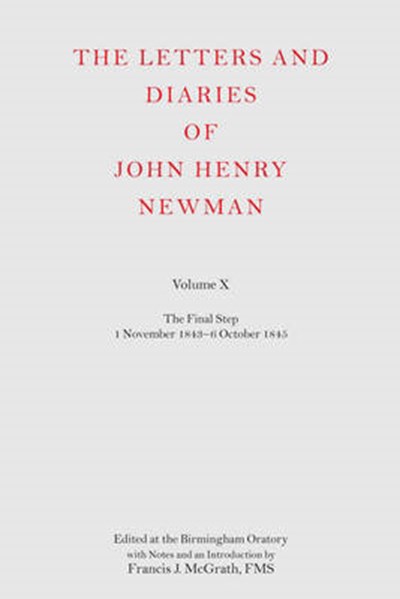 QTY
Add to Basket
Publisher: Oxford University Press
ISBN: 9780199254590
Number of Pages: 1058
Published: 28/09/2006
Width: 16.5 cm
Height: 24.2 cm
Description Author Information Reviews
John Henry Newman (1801-90) was brought up in the Church of England in the Evangelical tradition. An Oxford graduate and Fellow of Oriel College, he was appointed Vicar of St Mary's Oxford in 1828; from 1839 onwards he began to have doubts about the claims of the Anglican Church for Catholicity and in 1845 he was received into the Roman Catholic Church. He was made a Cardinal in 1879. His influence on both the restoration of Roman Catholicism in England and the advance of Catholic ideas in the Church of England was profound. This key volume covers the final twenty-three months of Newman's Anglican years from November 1843 to 6 October 1845. It begins with Francis Rivington's refusal to publish Lives of the English Saints because of their Roman Catholic bias, and Newman's withdrawal from the editorship after the first two volumes of the series is published by another publishing house. The whole country is watching his every move. Rumours are rife and rampant. He is accused of being in the pay of the Pope. He is also accused of being a Jesuit or about to become one. But the attacks which really hit home are those accusing him of being a liar, a sceptic, and a traitor. In February 1845, the University of Oxford's Convocation deprives William George Ward of his BA and MA Oxford degrees; and the proposal to censure Newman's Tract 90 is vetoed by two University Proctors. Newman sets to work in earnest on his Essay on Development, the publication of which will be the signal of his intentions to become a Roman Catholic. It goes to the printers in the third week of September. From this point on, events move swiftly. It is only a matter of days before Newman is received into the Church of Rome by Father Dominic Barberi at Littlemore on 9 October 1845.

Appointed the editor of Newman's Letters and Diaries in January 2003, following the sudden death of the previous editor, Gerard Tracey, Francis McGrath is an Australian Marist Brother and was the first Australian to complete doctoral work in Newman studies at Oxford. In the late 1970s and early 1980s, he undertook postgraduate studies at Boston College, Massachusetts. Recent work in Australia has included writing and coordinating three nationwide distance theological education programmes.