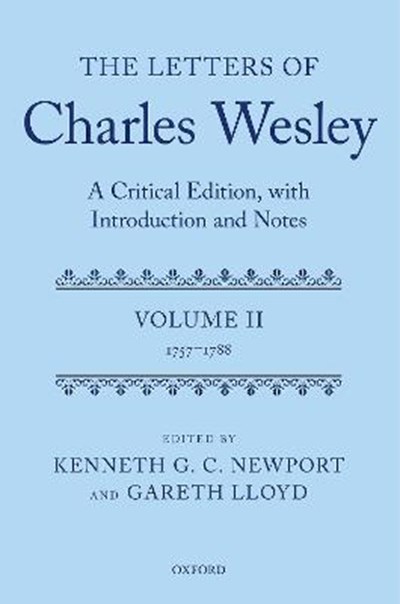 QTY
Add to Basket
Publisher: Oxford University Press
ISBN: 9780199259977
Number of Pages: 560
Published: 29/07/2021
Width: 16.2 cm
Height: 24 cm
Description Author Information Reviews
This second volume of a two volume edition contains letters written between 1757 and 1788, along with some undated letters, by the famous hymn writer, poet, and co-founder of Methodism, Charles Wesley (1707-1788). The edition brings together texts which are located in libraries and archives from across the globe and here presents them in transcribed form for the first time - many of the letters have never been previously published. The appended notes help the reader locate the letters in their proper historical and literary context and provide full information regarding the location of the original source and, where possible, something of its provenance. These texts provide an intimate glimpse into the world of early Methodism and Charles's own struggles and triumphs as a central figure within it. They collectively document the story of Charles Wesley's experiences later in his life as a leader of the Methodist movement and, of key importance for Charles, Methodism's place in the wider purposes of God. Here are letters of a theological kind, letters that reflect on his experiences as an itinerant preacher, letters that show something of his rather unsettled personality and letters that relate to his own personal and domestic, circumstances. Here we see something of the inner workings of a nascent religious group. These are not sanitised accounts written by those looking back, but first-hand accounts written from the heart of a lived experience. While this book will naturally appeal to those who have a specialist interest in the early history of Methodism, for others there is much to be gained from the picture it gives of the wider eighteenth-century world in which Charles and his co-religionists worked and lived.