Psalmody and Prayer in the Writings of Evagrius Ponticus 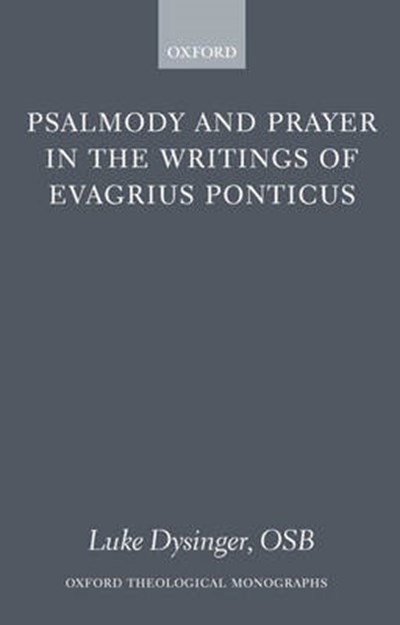 Psalmody and Prayer in the Writings of Evagrius Ponticus

QTY
Add to Basket
Publisher: Oxford University Press
ISBN: 9780199273201
Number of Pages: 256
Published: 10/02/2005
Width: 14.5 cm
Height: 22.4 cm
Description Author Information Reviews
Evagrius Ponticus was the most prolific writer of the Christian Desert Fathers. This book is a study of his life, works, and theology. It gives particular attention to his little-studied exegetical treatises, especially the Scholia on Psalms, as well as his better-known works, in order to present a more balanced picture of Evagrius the monk. The practice of psalmody in Northern Egyptian monastic communities of the late fourth century is explored, as is Evagrius' understanding of psalmody's healing properties, and his recommendation of memorized scripture as a spiritual weapon against temptation. Further chapters discuss Evagrius' model of spiritual progress and his use of medical terminology and theory; the logoi of providence and judgement and their use in Christian contemplation; and Evagrius' controversial Christology and his work, the Kephalaia Gnostica.

...we are presented with a portrait of Evagrius far more balanced, vivid and rooted than has often been offered in the past. This is a superb piece of work. Marcus Plested, Journal of Ecclesiastical History this is a brilliant work, an exceptionally fine piece of scholarship with a sureness of touch and carefully weighed judgment - to which one should add a clarity of exposition - rare in a doctoral thesis. Andrew Louth, Sobornost [a] quite brilliant doctoral dissertation ... one of the clearest accounts I have ever read ... Dysinger's book develops a fresh approach to Evagrios ... This is where the future of Evagrian studies lie. Andrew Louth, Journal of Ecclesiastical History ...a significant and important contribution to the study of Evagrius Ponticus. It is written in clear and crisp English, and it contains enough general material that one could put into the hands of an advanced undergraduate without anxiety. Augustine Casidy, The Journal of Theological Studies ...a well-documented and balanced presentation of the doctrine on psalmody and prayer of Evagrius, the first monastic theologian and the influential teacher of Palladius and Cassian as well as of many other writers in the monastic and mystical tradition. It deserves a careful and attentive reading by all who are interested in understand the uses of the Psalms in the life of prayer and who seek to profit from a fuller grasp of the patristic teaching of the Christian life as a process of inner transformation culminating in union with the Blessed Trinity. John Eudes Bamberger, Cistercian Studies Quarterly Dr Dysinger's fine monograph puts all students of Evagrius in his debt. Augustine Casiday, The Journal of Theological Studies [a] magnificent study... Reviews in Religion and Theology ...a detailed and sensitive analysis of Evagrius' writings on psalmody and prayer...innovative and genuinely advances our understanding of Evagrius as a monk and exegete and the central place of psalmody and prayer in Evagrian spirituality. Expository Times