God and the Atlantic

America, Europe, and the Religious Divide 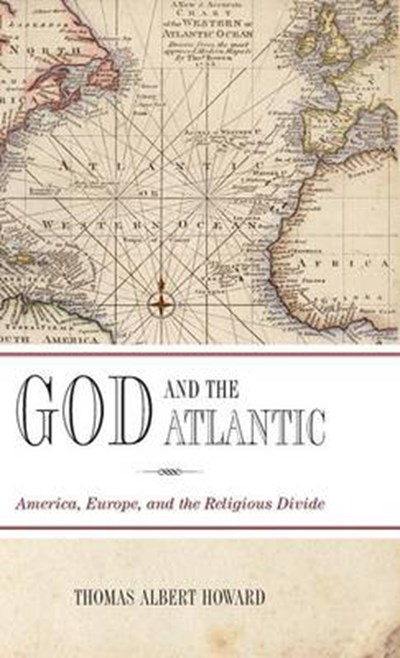 God and the Atlantic

America, Europe, and the Religious Divide

QTY
Add to Basket
Publisher: Oxford University Press
ISBN: 9780199565511
Number of Pages: 272
Published: 20/01/2011
Width: 15.2 cm
Height: 22.3 cm
Description Author Information Reviews
Since the eighteenth-century Enlightenment, the United States and Western Europe's paths to modernity have diverged sharply with respect to religion. In short, Americans have maintained much friendlier ties with traditional forms of religion than their European counterparts. What explains this transatlantic religious divide? Accessing the topic though nineteenth and early twentieth-century European commentary on the United States, Thomas Albert Howard argues that an 'Atlantic gap' in religious matters has deep and complex historical roots, and enduringly informs some strands of European disapprobation of the United States. While exploring in the first chapters 'Old World' disquiet toward the young republic's religious dynamics, the book turns in the final chapters and focuses on more constructive European assessments of the United States. Acknowledging the importance of Alexis de Tocqueville for the topic, Howard argues that a widespread overreliance on Tocqueville as interpreter of America has had a tendency to overshadow other noteworthy European voices. Two underappreciated figures here receive due attention: the Protestant Swiss-German church historian, Philip Schaff, and the French Catholic philosopher, Jacques Maritain. While the transatlantic religious divide has received commentary from journalists and sociologists in recent decades, this is the first major work of cultural and intellectual history devoted to the subject.

Thomas Albert Howard currently holds the Stephen Phillips Chair in history and is director of the Jerusalem & Athens Forum at Gordon College in Wenham, Massachusettes. He is the author of Religion and the Rise of Historicism and Protestant Theology and the Making of the Modern German University, winner of the Lilly Fellows Program Book Award for 2007. He is also the editor of The Future of Christian Learning: An Evangelical and Catholic Dialogue by Mark Noll and James Turner.

beautifully written, clearly structured, and argued and it contains a mine of material Paul Gifford, Journal of Contemporary Religion Howard has written a remarkable essay in the history of ideas. ... an original contribution, with implications far beyond its original focus for the history and theory of secularization. Timothy Jenkins, Journal of European Studies [an] immensely thoughtful and useful book ... engagingly written in a lucid and accessible style, for which the author should be congratulated. It valuably moves beyond many generations of thought that have eclipsed America from conventional religious history. David Nash, American Historical Review This book is of the highest calibre scholarship. Its thorough research and analysis shines light on to a period in the development of intellectual argument which has perhaps been rather neglected. The complicated interwoven ideas and arguments will require the fullest attention of a concentrated mind, but the stories that are there to be discovered are well worth the effort. David Bradwell, Methodist Recorder {Main} The causes of the religious divide between Europe and America are hotly disputed among social scientists and contemporary historians. By carefully examining European views of America since the late eighteenth century, Thomas Albert Howard is the first scholar to give historical depth to this debate. Everyone interested to find a way through the labyrinth of transatlantic comparisons and prejudice is well advised to read this book. Hartmut Lehmann, Former Director, Max Planck Institute for History and the German Historical Institute This is an excellent, thoughtful, and balanced book. As a historical study with contemporary relevance, it is tightly focused, but gracefully written, with a nice balance struck between theoretical analysis and expository narrative. Howard's ability to navigate the complex political-religious histories of both Europe and the United States gives this book a truly transatlantic perspective. Richard Crane, author of Passion of Israel: Jacques Maritain, Catholic Conscience, and the Holocaust God and the Atlantic is not only a well-researched and wide-ranging study, it is also a timely book that holds out the promise of helping Americans and Europeans understand each other better. It is illuminating to discover how certain contemporary reactions to apparently new developments are actually based on assumptions with deep historical roots. This book deserves to be read well beyond the scholarly world. Timothy Larsen, author of Crisis of Doubt: Honest Faith in Nineteenth-Century England For breadth of research, depth of historical insight, and timeliness of publication, God and the Atlantic is an unusually fine work. Its careful cataloguing of European responses to religion in the United States shows that perspectives from the conservative Right and radical Left share a common rigidity and even sometimes nearly identical judgments. By contrast, European savants who traveled extensively in the United States have sometimes seen things more clearly, and with more nuance, than even America's homegrown observers. The book is a pathbreaking exploration. Mark A. Noll, University of Notre Dame. Author of America's God: From Jonathan Edwards to Abraham Lincoln This is a wide-ranging, well-written book that, by focusing on religion, sheds a great deal of light on the cultural differences between the United States and western Europe. It will commend itself to political commentators and scholars of international affairs as well as historians. Alister Chapman, Journal of Ecclesiastical History The author expertly demonstrates that Europeans assessment of American religion is not simply negative ... This book is valuable for scholars interested in the intellectual history of the embattled but remarkably resilient secularization thesis. Benjamin L. Hartley, Journal of American History