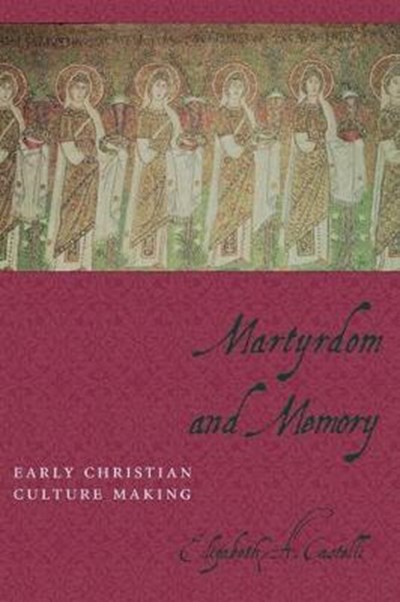 eBook FAQ
Add to Basket
Publisher: Columbia University Press
ISBN: 9780231129879
Number of Pages: 360
Published: 05/06/2007
Width: 17.1 cm
Height: 23.2 cm
Description Author Information Reviews
Martyrs are produced, Elizabeth Castelli suggests, not by the lived experience of particular historical individuals but by the stories that are later told about them. And the formulaic character of stories about past suffering paradoxically serves specific theological, cultural, or political ends in the present. Martyrdom and Memory explores the central role of persecution in the early development of Christian ideas, institutions, and cultural forms and shows how the legacy of Christian martyrdom plays out in today's world. In the pre-Constantinian imperial period, the conflict between Roman imperial powers and the subject Christian population hinged on competing interpretations of power, submission, resistance, and victory. This book highlights how both Roman and Christian notions of law and piety deployed the same forms of censure and critique, each accusing the other of deviations from governing conventions of gender, reason, and religion. Using Maurice Halbwachs's theoretical framework of collective memory and a wide range of Christian sources-autobiographical writings, martyrologies and saints'lives, sermons, art objects, pilgrimage souvenirs, and polemics about spectacle-Castelli shows that the writings of early Christians aimed to create public and ideologically potent accounts of martyrdom. The martyr's story becomes a "usable past" and a "living tradition" for Christian communities and an especially effective vehicle for transmitting ideas about gender, power, and sanctity. An unlikely legacy of early Christian martyrdom is the emergence of modern "martyr cults" in the wake of the 1999 shootings at Columbine High School. Focusing specifically on the martyr cult associated with one of the victims, Martyrdom and Memory argues that the Columbine story dramatically expresses the ongoing power of collective memory constructed around a process of rendering tragic suffering redemptive and meaningful. In the wake of Columbine and other contemporary legacies of martyrdom's ethical ambivalence, the global impact of Christian culture making in the early twenty-first century cannot be ignored. For as the last century's secularist hypothesis sits in the wings, "religion" returns to center stage with one of this drama's most contentious yet riveting stars: the martyr.

Elizabeth A. Castelli is associate professor of religion at Barnard College at Columbia University. She is the author of Imitating Paul: A Discourse of Power, coauthor of The Postmodern Bible, and editor of several books, including Women, Gender, and Religion: A Reader. She serves on the editorial board of the Journal of the American Academy of Religion and is the editor of a new journal, Postscripts: Sacred Texts and Contemporary Worlds. In 2003 and 2004 she was the senior research scholar at the Center for Religion and Media at New York University.

Castelli has written a masterful book about the way early Christians used martyrdom to construct a collective memory of religious suffering. Choice February 2005 Castelli succeeds brilliantly in her aim to reveal the way martyrdom constructed a new ideology... that subverted Roman notions. -- Kimberly B. Stratton Biblical Theology Bulletin vol. 35 A required reading for anyone who studies and teaches on this problem from the past that remains distressingly present. -- Chris Frilingos Religious Studies Review 4/1/2006 Castelli's stimulating and provocative study is a creative contribution to this flourishing area. -- Judith Lieu Ecclesiastical History 1/1/2007 Vol. 58/1