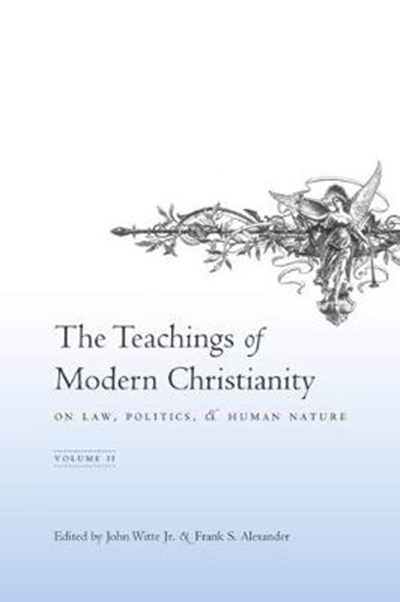 QTY
Add to Basket
Publisher: Columbia University Press
ISBN: 9780231133609
Number of Pages: 600
Published: 18/11/2005
Width: 15.6 cm
Height: 23.5 cm
Description Author Information Reviews
Divided into two volumes, The Teachings of Modern Christianity on Law, Politics, and Human Nature offers a landmark collection of writings from twenty Christian thinkers of the nineteenth and twentieth centuries and analyses of their work by leading contemporary religious scholars.With selections from the works of Jacques Maritain, Gustavo Gutierrez, Dorothy Day, Pope John Paul II, Susan B. Anthony, Karl Barth, Dietrich Bonhoeffer, Reinhold Niebuhr, Martin Luther King Jr., Nikolai Berdyaev, Vladimir Lossky, and others, Volume 2 illustrates the different venues, vectors, and sometimes-conflicting visions of what a Christian understanding of law, politics, and society entails. The collection includes works by popes, pastors, nuns, activists, and theologians writing from within the Catholic, Protestant, and Orthodox Christian traditions. Addressing racism, totalitarianism, sexism, and other issues, many of the figures in this volume were the victims of church censure, exile, imprisonment, assassination, and death in Nazi concentration camps. These writings amplify the long and diverse tradition of modern Christian social thought and its continuing relevance to contemporary pluralistic societies. The volume speaks to questions regarding the nature and purpose of law and authority, the limits of rule and obedience, the care and nurture of the needy and innocent, the rights and wrongs of war and violence, and the separation of church and state. The historical focus and ecumenical breadth of this collection fills an important scholarly gap and revives the role of Christian social thought in legal and political theory.The first volume of The Teachings of Modern Christianity on Law Politics, and Human Nature includes essays by leading contemporary religious scholars, exploring the ideas, influences, and intellectual and cultural contexts of the figures from this volume.

These essays and excerpts address an extraordinary range of essential theological and political concerns... Highly recommended. Choice 11/1/2006 This is a most impressive collection of essays, written by some of the most eminent scholars in their fields. Ecclesiastical Law Journal Vol 11 No 1