Natural History of the Bible

An Environmental Exploration of the Hebrew Scriptures 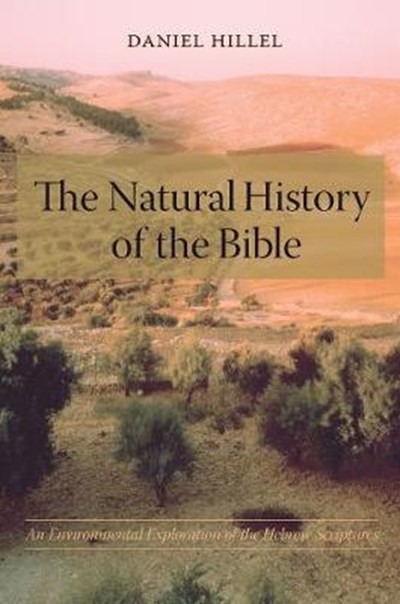 Natural History of the Bible

An Environmental Exploration of the Hebrew Scriptures

QTY
Add to Basket
Publisher: Columbia University Press
ISBN: 9780231133623
Number of Pages: 376
Published: 07/12/2005
Width: 15.7 cm
Height: 22.6 cm
Description Author Information Reviews
Traversing river valleys, steppes, deserts, rain-fed forests, farmlands, and seacoasts, the early Israelites experienced all the contrasting ecological domains of the ancient Near East. As they grew from a nomadic clan to become a nation-state in Canaan, they interacted with indigenous societies of the region, absorbed selective elements of their cultures, and integrated them into a radically new culture of their own. Daniel Hillel reveals the interplay between the culture of the Israelites and the environments within which it evolved. More than just affecting their material existence, the region's ecology influenced their views of creation and the creator, their conception of humanity's role on Earth, their own distinctive identity and destiny, and their ethics. In The Natural History of the Bible, Hillel shows how the eclectic experiences of the Israelites shaped their perception of the overarching unity governing nature's varied manifestations. Where other societies idolized disparate and capricious forces of nature, the Israelites discerned essential harmony and higher moral purpose. Inspired by visionary prophets, they looked to a singular, omnipresent, omnipotent force of nature mandating justice and compassion in human affairs. Monotheism was promoted as state policy and centralized in the Temple of Jerusalem. After it was destroyed and the people were exiled, a collection of scrolls distilling the nation's memories and spiritual quest served as the focus of faith in its stead. A prominent environmental scientist who surveyed Israel's land and water resources and has worked on agricultural development projects throughout the region, Daniel Hillel is a uniquely qualified expert on the natural history of the lands of the Bible. Combining his scientific work with a passionate, life-long study of the Bible, Hillel offers new perspectives on biblical views of the environment and the origin of ethical monotheism as an outgrowth of the Israelites' internalized experiences.

Daniel Hillel is professor emeritus of environmental studies, University of Massachusetts, and senior research scientist, Center for Climate Systems Research, Columbia University. He is the author or editor of more than twenty books, including Negev: Land, Water, and Life in a Desert Enviornment; Out of the Earth: Civilization and the Life of the Soil; and Rivers of Eden: The Struggle for Water and the Quest for Peace in the Middle East. He is the 2012 World Food Prize Laureate.

This is a book to supplement and fill in details of natural history that are generally absent or neglected in standard hisotrical studies. It is well illustrated and the bibliography is extensive. The Master's Seminary Journal Vol. 20, No. 2 That environmental factors affect our daily lives is disputed by no one. But can environment, climate and topology play a part in the development of a religious community? Hillel, professor emeritus of environmental studies at the University of Massachusetts and senior research scientist at Columbia University's Center for Climate Systems Research, says yes. He comes to the subject immersed in the lore of ancient Israel, from his grandfather's instruction to his own years living in modern Israel. He sees the Jewish belief system as an amalgam of ideas emerging from an interplay of human beings with both the land and its peoples, "absorb[ing] all the cultural strands... from all the ecological domains of the ancient Near East... and assimilat[ing] them into their own culture." He divides sacred history into seven "domains," dispensations based not on some theological construct but rather on the terrain in which the Israelites lived. What emerges is a largely naturalistic explanation of Israel's beliefs and laws, with a strong emphasis on the impact of culture and environment on the evolving Jewish religion. Hillel recounts, in a richly detailed and beautifully told manner, the origins of the Hebrew Bible in a new and satisfying way. (Jan.) Publisher's Weekly Hillel recounts, in a richly detailed and beautifully told manner, the origins of the Hebrew Bible in a new and satisfying way.Publishers Weekly Publishers Weekly 9/12/05 With all the commentaries and books on the Hebrew Scriptures that have appeared over the years, it would seem nearly impossible to write something unique and illuminating. Yet this is precisely what Hillel has done by providing an environmental and ecological analysis of the text. Library Journal 11/1/05 Engrossing... Hillel offers new perspectives on biblical views of the environment. Wispas 11/2005 The results are fascinating. -- Edward Rothstein New York Times 2/6/2005 Hillel... offers us a quintessential resource for understanding the role of nature in Jewish cultural and religious movements. -- Daneil Orenstein Jerusalem Report 4/3/2006 Hillel takes a fresh and invigorating approach to biblical exegesis... A detailed ecological analysis of the Bible. -- Josie Glausiusz Forward 4/18/2006 Hillel's contribution is truly distinctive, insightful and provocative. -- Sandee Brawarsky The Jewish Week 4/14/2006 [ The Natural History of the Bible] should be of equal interest to the student of ecology and the student of theology. -- Sir Ghillean Prance The Times Higher Education Supplement 5/12/2006 A highly stimulating new take on an old question, and deserves to be widely read. -- John Barton Times Literary Supplement 6/9/2006 It definitely belongs on the shelves of those interested in the development of biblical culture. -- Rabbi Rachel Essermang The Reporter 6/9/2006 Daniel Hillel's The Natural History of the Bible is a very good read and deserves a place on the shelf. -- Alon Tal Environmental History 7/1/2006 Fascinating because of its fine prose, important because of its scope. Kansas City Star 11/19/2006 An informed and readable entrance into a profound world. -- Harvey E. Goldberg The European Legacy Vol. 12 No. 2 '07 The Natural History of the Bible is one beautiful book. -- Jeanne Kay Guelke Environmental Ethics Spring 2007 I highly recommend this book. -- Rabbi Louis A. Rieser Church and Synagogue Libraries Nov/Dec 2006 Daniel Hillel has done a magnificent job and contributed substantially both to Biblical scholarship and to the understanding of the ecology of the area. But he goes much deeper than simply interpreting the Bible's ecological setting. Hillel allows us to understand better the minds of those who were recording the events in Egypt, the return to Canaan, David and Solomon, and the various interpretations of Jerusalem, as well as the meaning of these events. So well presented and so informative. -- Peter H. Raven, Home Secretary of the U.S. National Academy of Sciences and former president of the American Association for the Advancement of Science A refreshing, detailed and stimulating account of an important aspect of ancient Israelite development. -- Hilary Marlow Journal of Jewish Studies Autumn 2007 For anyone concerned about the origins of the Hebrew Bible... this is a fascinating book that can be highly recommended. -- Antoinette Bosco The American Catholic Aug/Sept 2008 Hillel's rational accounts of natural phenomena in the Hebrew scriptures and his thesis about the formation of montheism will assist anyone who wishes to extend understanding of the Bible as a foundational text for Western civilization and to comprehend the relationship between faith formation and place. -- James W. Hood Friends Journal 10/1/2011