Faith in Their Own Color 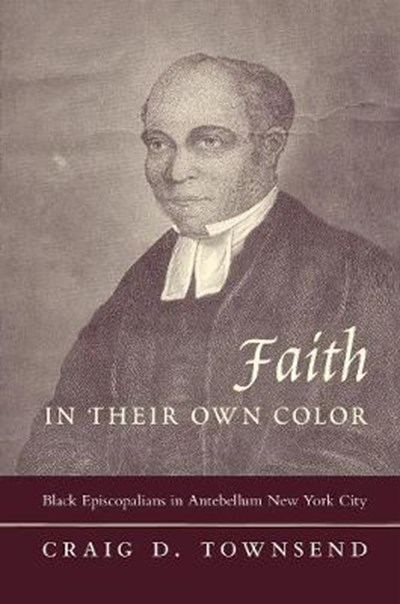 Faith in Their Own Color

eBook FAQ
Add to Basket
Publisher: Columbia University Press
ISBN: 9780231134682
Published: 27/09/2005
Description Author Information Reviews
On a September afternoon in 1853, three African American men from St. Philip's Church walked into the Convention of the Episcopal Diocese of New York and took their seats among five hundred wealthy and powerful white church leaders. Ultimately, and with great reluctance, the Convention had acceded to the men's request: official recognition for St. Philip's, the first African American Episcopal church in New York City. In Faith in Their Own Color, Craig D. Townsend tells the remarkable story of St. Philip's and its struggle to create an autonomous and independent church. His work unearths a forgotten chapter in the history of New York City and African Americans and sheds new light on the ways religious faith can both reinforce and overcome racial boundaries. Founded in 1809, St. Philip's had endured a fire; a riot by anti-abolitionists that nearly destroyed the church; and more than forty years of discrimination by the Episcopalian hierarchy. In contrast to the majority of African Americans, who were flocking to evangelical denominations, the congregation of St. Philip's sought to define itself within an overwhelmingly white hierarchical structure. Their efforts reflected the tension between their desire for self-determination, on the one hand, and acceptance by a white denomination, on the other. The history of St. Philip's Church also illustrates the racism and extraordinary difficulties African Americans confronted in antebellum New York City, where full abolition did not occur until 1827. Townsend describes the constant and complex negotiation of the divide between black and white New Yorkers. He also recounts the fascinating stories of historically overlooked individuals who built and fought for St. Philip's, including Rev. Peter Williams, the second African American ordained in the Episcopal Church; Dr. James McCune Smith, the first African American to earn an M.D.; pickling magnate Henry Scott; the combative priest Alexander Crummell; and John Jay II, the grandson of the first chief justice of the Supreme Court and an ardent abolitionist, who helped secure acceptance of St. Philip's.

A fascinating encounter with the dynamics of social and religious change impating African Americans in antebellum New York. -- A.J. Williams-Myers Multicultural Review 10/1/2006 Townsend's book is invaluable to any scholar... and has wide application for students of religion and race. -- Graham Russel Gao Hodges The Journal of American History 12/1/2006 I highly recommend this very useful text. -- Sandy Dwayne Martin Church History 6/1/2007 [An] important contribution to our understanding of a neglected chapter of New York City religious history. -- Kenneth A. Scherzer, H-Net Reviews 5/1/06 Faith in Their Own Color will be of interest to all historians of the antebellum North and deserves a wide readership. -- David Brown Ecclesiastical History Vol. 59/1