Prophecy, Alchemy, and the End of Time

John of Rupescissa in the Late Middle Ages 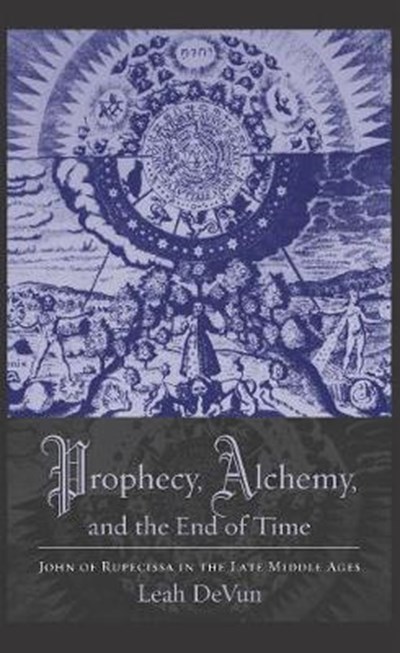 Prophecy, Alchemy, and the End of Time

John of Rupescissa in the Late Middle Ages

Publisher: Columbia University Press
ISBN: 9780231145381
Number of Pages: 272
Published: 03/03/2009
Width: 15.2 cm
Height: 22.9 cm
Description Author Information Reviews
In the middle of the fourteenth century, the Franciscan friar John of Rupescissa sent a dramatic warning to his followers: the last days were coming; the apocalypse was near. Deemed insane by the Christian church, Rupescissa had spent more than a decade confined to prisons--in one case wrapped in chains and locked under a staircase--yet ill treatment could not silence the friar's apocalyptic message. Religious figures who preached the end times were hardly rare in the late Middle Ages, but Rupescissa's teachings were unique. He claimed that knowledge of the natural world, and alchemy in particular, could act as a defense against the plagues and wars of the last days. His melding of apocalyptic prophecy and quasi-scientific inquiry gave rise to a new genre of alchemical writing and a novel cosmology of heaven and earth. Most important, the friar's research represented a remarkable convergence between science and religion. In order to understand scientific knowledge today, Leah DeVun asks that we revisit Rupescissa's life and the critical events of his age--the Black Death, the Hundred Years' War, the Avignon Papacy--through his eyes. Rupescissa treated alchemy as medicine (his work was the conceptual forerunner of pharmacology) and represented the emerging technologies and views that sought to combat famine, plague, religious persecution, and war. The advances he pioneered, along with the exciting strides made by his contemporaries, shed critical light on later developments in medicine, pharmacology, and chemistry.

Leah DeVun is associate professor of history at Rutgers University. Her research focuses on the history of the human body in premodern Europe and the legacy of that history in the modern world. Her published work centers on issues of gender and technology.

DeVun's book is well-constructed, thoroughly documented, instructive, and very useful. -- Chara Crisciani American Historical Review June 2010 [H]ighly readable text, amply supported by some fifty pages of endnotes, a bibliography, and a usefully compiled index, Leah DeVun has produced an original and valuable book. -- Stanton J. Linden, Washington State University SPECULUM Vol. 85, 2010 This book offers the reader a tour of one of the more peculiar corners of medieval thought, a corner defined by the intersection of three enterprises: Spiritual Franciscanism, Joachite apocalypticism, and alchemical speculation. -- David E. Timmer Church History Vol 79, No 3 DeVun has written a splendid book about medieval alchemy and apocalyptic prophecy that is truly a pleasure to read. Prophecy, Alchemy, and the End of Time will be an essential item for anyone hoping to understand the history of science and religion in the later Middle Ages. -- Laura Ackerman Smoller Medievalia et Humanistica No 36 An excellent study... not only for its careful description of an underappreciated figure, but also because of the important theoretical contributions [DeVun] makes to a more holistic approach to our understanding of the history of science and to late medieval culture. -- Gregory J. Miller H-German 2/1/10