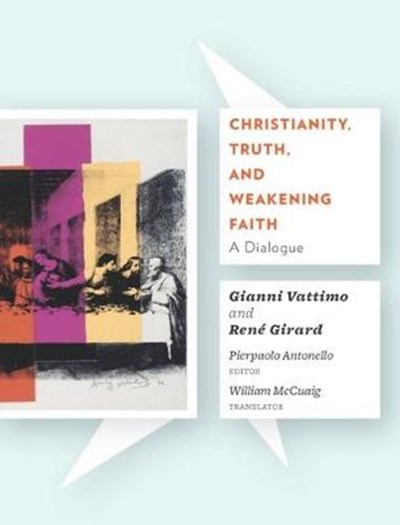 eBook FAQ
Add to Basket
Publisher: Columbia University Press
ISBN: 9780231148283
Number of Pages: 136
Published: 16/02/2010
Width: 14 cm
Height: 17.8 cm
Description Author Information Reviews
The debate over the place of religion in secular, democratic societies dominates philosophical and intellectual discourse. These arguments often polarize around simplistic reductions, making efforts at reconciliation impossible. Yet more rational stances do exist, positions that broker a peace between relativism and religion in people's public, private, and ethical lives. Christianity, Truth, and Weakening Faith advances just such a dialogue, featuring the collaboration of two major philosophers known for their progressive approach to this issue. Seeking unity over difference, Gianni Vattimo and Rene Girard turn to Max Weber, Eric Auerbach, and Marcel Gauchet, among others, in their exploration of truth and liberty, relativism and faith, and the tensions of a world filled with new forms of religiously inspired violence. Vattimo and Girard ultimately conclude that secularism and the involvement (or lack thereof) of religion in governance are, in essence, produced by Christianity. In other words, Christianity is "the religion of the exit from religion," and democracy, civil rights, the free market, and individual freedoms are all facilitated by Christian culture. Through an exchange that is both intimate and enlightening, Vattimo and Girard share their unparalleled insight into the relationships among religion, modernity, and the role of Christianity, especially as it exists in our multicultural world.

Gianni Vattimo is emeritus professor of philosophy at the University of Turin and a member of the European Parliament. His books with Columbia University Press are Christianity, Truth, and Weakening Faith: A Dialogue (with Rene Girard), Not Being God: A Collaborative Autobiography, Art's Claim to Truth, After the Death of God, Dialogue with Nietzsche, The Future of Religion (with Richard Rorty), Nihilism and Emancipation: Ethics, Politics, and the Law, and After Christianity. Rene Girard held the position of Andrew B. Hammond Professor of French Language, Literature, and Civilization at Stanford University until his retirement in 1995. He is the cofounder of the Colloquium on Violence and Religion, which meets annually to discuss issues in mimetic theory, scapegoating, violence, and religion, and his books include Violence and the Sacred, Things Hidden Since the Foundation of the World, and A Theatre of Envy. In 2005, Girard was elected to L'Academie francaise, the highest tribute for a French intellectual. Pierpaolo Antonello is senior university lecturer in Italian at St. John's College, Cambridge University William McCuaig is most recently the translator of Vattimo's Not Being God.

Christianity, Truth, and Weakening Faith truly marks an important set of occasions in which two of today's most prominent and perhaps controversial thinkers on Christianity engage each other's thoughts. The glaring question is: How could such a dialogue not set into violent conflict the factual approach of the anthropologist Girard and the hermeneutic approach of the nihilist Vattimo? It seems that the real success of the editor is his understanding that these thinkers already share much and have interests and methods that greatly complement--and even support--each other. -- Robert T. Valgenti, Lebanon Valley College Rich, difficult, fascinating, and provocative reading on Christianity and culture from two of the new Europe's leading eggheads. Library Journal 3/1/10