Why I Am Not Going to Buy a Computer 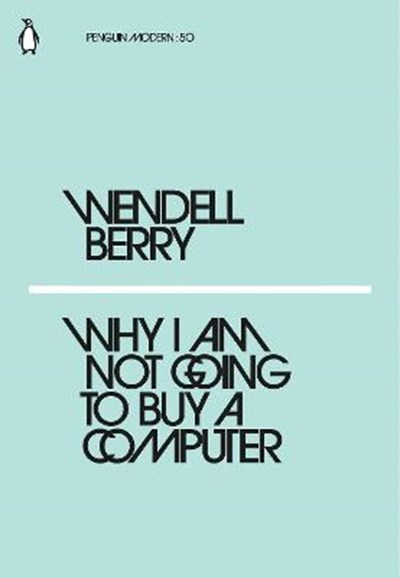 Why I Am Not Going to Buy a Computer

QTY
Add to Basket
Publisher: Penguin Books Ltd
ISBN: 9780241337561
Number of Pages: 64
Published: 22/02/2018
Width: 11.1 cm
Height: 16.1 cm
Description Author Information Reviews
'Do I wish to keep up with the times? No. My wish simply is to live my life as fully as I can' The great American poet, novelist and environmental activist argues for a life lived slowly. Penguin Modern: fifty new books celebrating the pioneering spirit of the iconic Penguin Modern Classics series, with each one offering a concentrated hit of its contemporary, international flavour. Here are authors ranging from Kathy Acker to James Baldwin, Truman Capote to Stanislaw Lem and George Orwell to Shirley Jackson; essays radical and inspiring; poems moving and disturbing; stories surreal and fabulous; taking us from the deep South to modern Japan, New York's underground scene to the farthest reaches of outer space.

'A farmer of sorts and an artist of sorts,' Wendell Berry is the author of more than fifty books of poetry, fiction, and essays. He has received fellowships from the Guggenheim, Lannan, and Rockefeller foundations and the National Endowment for the Arts, and also the Dayton Literary Peace Prize, the Cleanth Brooks Medal for Lifetime Achievement, and the National Humanities Medal. For more than forty years, he has lived and farmed in his native Henry Country, Kentucky, with his wife, Tanya, and their children and grandchildren.