An enchanting, beautiful book for lovers of the natural world 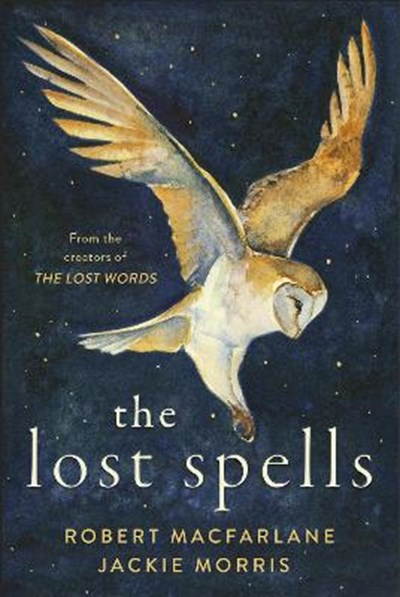 An enchanting, beautiful book for lovers of the natural world

QTY
Add to Basket
Publisher: Penguin Books Ltd
ISBN: 9780241444641
Number of Pages: 240
Published: 01/10/2020
Width: 13.1 cm
Height: 18.5 cm
Description Author Information Reviews
Beautiful books make unforgettable gifts. This pocket-sized treasure is the perfect gift for fans of nature, language and rich artwork, adult and child alike! Kindred in spirit to The Lost Words but fresh in its form, The Lost Spells introduces a beautiful new set of natural spell-poems and artwork by beloved creative duo Robert Macfarlane and Jackie Morris. Each "spell" conjures an animal, bird, tree or flower -- from Barn Owl to Red Fox, Grey Seal to Silver Birch, Jay to Jackdaw -- with which we share our lives and landscapes. Moving, joyful and funny, The Lost Spells above all celebrates a sense of wonder, bearing witness to nature's power to amaze, console and bring joy. Written to be read aloud, painted in brushstrokes that call to the forest, field, riverbank and also to the heart, The Lost Spells summons back what is often lost from sight and care, teaching the names of everyday species, and inspiring its readers to attention, love and care. 'Luminously beautiful. An amulet in dark times, to be carried like a talisman out into the world, where it is very much needed' Dara McAnulty 'A book about spells that succeeds in being spell-binding in its own right . . . It already feels like a true classic. Buy one copy for yourself and any others for as many children as you can afford' Books for Keeps

Robert Macfarlane (Author) Robert Macfarlane is the bestselling author of Mountains of the Mind, The Wild Places, The Old Ways, Landmarks, and Underland, and co-creator of The Lost Words and The Lost Spells. Mountains of the Mind won the Guardian First Book Award and the Somerset Maugham Award and The Wild Places won the Boardman-Tasker Award. Both books have been adapted for television by the BBC. The Lost Words won the Books Are My Bag Beautiful Book Award and the Hay Festival Book of the Year. Robert Macfarlane is a Fellow of Emmanuel College, Cambridge, and writes on environmentalism, literature and travel for publications including the Guardian, the Sunday Times and The New York Times. He is now working on his third book with long-time collaborator, Jackie Morris: The Book of Birds. Jackie Morris (Author) Jackie Morris is the bestselling and award-winning co-creator of The Lost Words and The Lost Spells, two books which have captured the hearts of hundreds of thousands of readers of all ages. She also illustrated and introduced a new edition of Barbara Newhall Follett's lost classic of wild literature, The House Without Windows. As an author, Jackie Morris has produced over forty beloved children's books; as an artist she has also worked with the New Statesman, Independent and Guardian, among others. She won the Kate Greenaway Medal and the British Book Awards Children's Book of the Year for The Lost Words in 2018. Jackie lives in a cottage on the cliffs of Pembrokeshire, where she is now working on her forthcoming third book with long-time collaborator, Robert Macfarlane: The Book of Birds.