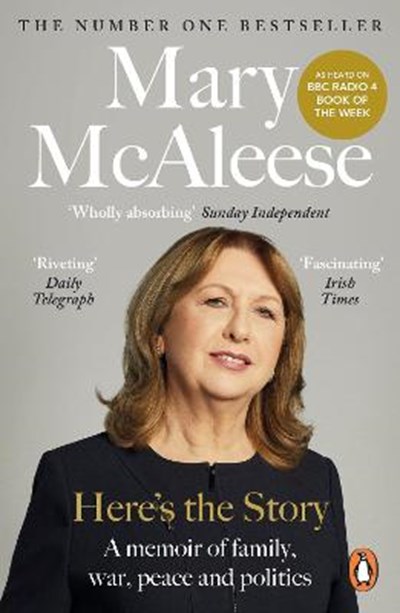 QTY
Add to Basket
Publisher: Penguin Books Ltd
ISBN: 9780241986202
Number of Pages: 416
Published: 27/05/2021
Width: 12.9 cm
Height: 19.8 cm
Description Author Information Reviews
The groundbreaking two-term President of Ireland tells the stories of her life When a young Mary McAleese told a priest that she planned to become a lawyer, the priest dismissed the idea: she knew no one in the law, and she was female. The reality of what she went on to achieve - despite those obstacles, and despite a sectarian attack that forced her family to flee their home - is even more improbable. In this luminous memoir, Mary McAleese traces that astonishing arc: from the tight streets of north Belfast, to a professorship in Dublin while still in her twenties, behind-the-scenes work on the peace process, and two triumphant terms as President of Ireland. She writes of her encounters with prime ministers, popes and royalty with the same easy candour and intimacy with which she describes her childhood. And her account of the latest act in her remarkable career - quietly pursuing a doctorate, and loudly opposing the misogyny of the Catholic Church - is inspiring. Here's the Story is warm, witty, often surprising and relentlessly fascinating: an extraordinarily intimate memoir by one of the most remarkable public figures of our time. _______________ 'A fascinating story and well worth the read' Irish Times 'Riveting ... A fiercely urgent reminder to the world - and the Government - that peace must never be sacrificed for politics' Telegraph 'Excellent' Matt Cooper, Irish Daily Mail 'I was enthralled and absorbed by this memoir' Sunday Independent 'What an incredible life lived by an outstanding role model. I ate this book up' Sinead Moriarty 'Full of conviction and isn't afraid of plain speaking ... Priests, popes, paramilitaries and Ian Paisley are all held to account' Herald Scotland '[A] chatty, provocative and embraceable biography' RTE Guide

Mary McAleese was born in Belfast in 1951. In 1975 she was appointed Reid Professor of Law at Trinity College Dublin, and in 1987 she became Director of the Institute of Professional Legal Studies at Queen's University Belfast. She was elected President of Ireland in 1997, and re-elected unopposed in 2004. Since stepping down as President in 2011, she has earned a PhD in canon law while emerging as a forceful critic of the institutional Church's misogyny.