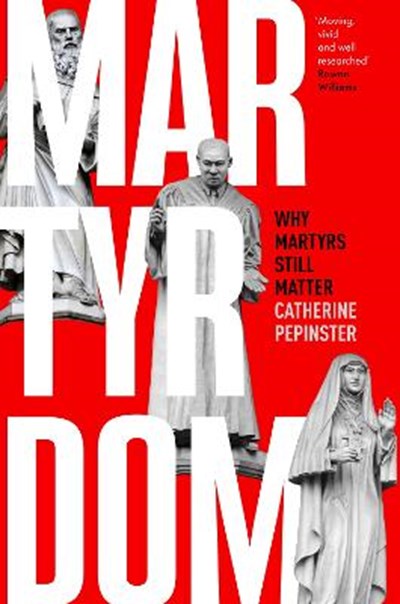 eBook FAQ
Add to Basket
Publisher: SPCK Publishing
ISBN: 9780281081653
Number of Pages: 304
Published: 15/10/2020
Width: 15.6 cm
Height: 23.4 cm
Description Author Information Reviews
Since the early days of Christianity, martyrdom has had a particularly honoured place, and 2020 will see the Catholic Church marking the fiftieth anniversary of the canonization of 40 martyrs killed during the Reformation in England and Wales. In this powerful exploration of the significance of martyrdom today, Catherine Pepinster looks at the lives of over a dozen martyrs, past and present, to consider how ideas about giving up your life for your faith have changed over the centuries, and especially the way martyrs often become caught up in the clash between religion and politics.

Catherine Pepinster has been a journalist for 30 years, reaching the top of national newspapers and then becoming editor of the Catholic weekly, The Tablet, for 13 years. She is a well-known commentator and writer on religious affairs and is a regular contributor to the 'Thought for the Day' slot on BBC Radio 4's Today programme. Since stepping down as editor of The Tablet, she has written on religion for many publications, including The Guardian, The Observer, The Times, the Religion News Service, the Church Times, the Catholic Herald and The Tablet. She regularly appears on Sky News and the BBC as a commentator. Her book, The Keys and the Kingdom: The British and the papacy from John Paul II to Francis, was published by Bloomsbury in autumn 2017. Since leaving The Tablet, she has also worked for The Anglican Centre in Rome. Her work as a journalist, broadcaster and author, as well as her work for the Anglican Centre, means that she is already well known to people of influence in religious circles and to others interested in religion. As well as her journalistic skills, she brings academic rigour to her writing: she has an MA in philosophy and religion and spent six months at St Benet's Hall, Oxford, as a Visiting Scholar.