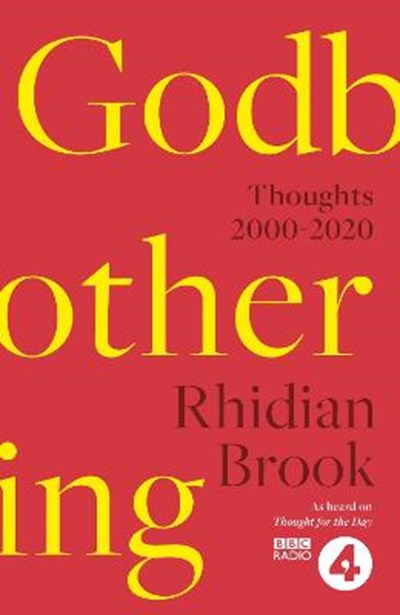 QTY
Add to Basket
Publisher: SPCK Publishing
ISBN: 9780281083893
Published: 19/03/2020
Description Author Information Reviews
Why bother with God? More to the point, why is God bothering with us? For the past two decades, award-winning novelist and screen writer, Rhidian Brook, has pondered those questions on Radio 4's Thought for the Day. Over 100 of his Thoughts are now presented here, inviting you to reflect with him on the deeper spiritual dimensions of our lives and times. What is God's favorite movie? How would Jesus vote? Why do leaders fail? Do you know what matters in life? What is love? Through his reflections on these and many other questions, Rhidian Brook has encouraged millions to think about the underlying truths and values that we need to make sense of our lives in the twenty-first century This absorbing, perceptive and elegantly crafted collection of his Thoughts will enable you to do the same - to think about what you truly value, and how to live it out from day to day.

Rhidian Brook is an award-winning writer of fiction, television drama and film. His first novel, The Testimony Of Taliesin Jones (HarperCollins) won three prizes, including the 1997 Somerset Maugham Award, and was made into a film of the same name starring Jonathan Pryce. His second novel, Jesus And The Adman(HarperCollins) was published in 1999. His third novel, The Aftermath (Penguin), was published in April 2013 and was translated into twenty languages. The Aftermath has been made into a feature film of the same name starring Keira Knightley and Alexander Skarsgard. His fourth novel, The Killing of Butterfly Joe (Picador), was published March 2018. His short stories have been published by The Paris Review, Punch, The New Statesman, Time Out and others; and several were broadcast on BBC Radio 4's Short Story.His first commission for television - Mr. Harvey Lights a Candle - was broadcast in 2005 on BBC1 and starred Timothy Spall. He wrote for the BBC series Silent Witness between 2005-7, and the factual drama Atlantis for BBC1 in 2008. Africa United, his first feature film (Pathe), went on general release in the UK in October 2010. He then adapted his novel The Aftermath for Scott Free. The film goes on general release (through Fox Searchlight) in March 2019. He is currently[when?] adapting his fourth novel - The Killing of Butterfly Joe - for film. He has written articles for papers, including The Observer, The Guardian and The Daily Telegraph. In 2005, he presented Nailing The Cross, a documentary for BBC1. In 2006 he broadcast a series In The Blood for BBC World Service, recording his family's journey through the AIDS pandemic. His book about that journey - More Than Eyes Can See - was published by Marion Boyars in 2007. He has been a regular contributor to Radio 4's Thought for the Day since 2000.