The Confidential Diaries of Alan Don, Chaplain to the King, the Archbishop and the Speaker, 1931-1946 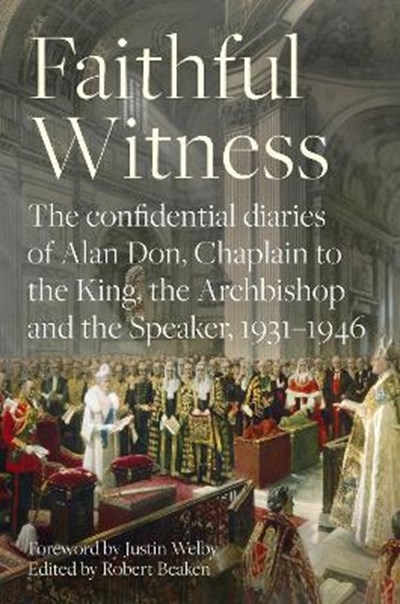 The Confidential Diaries of Alan Don, Chaplain to the King, the Archbishop and the Speaker, 1931-1946

QTY
Add to Basket
Publisher: SPCK Publishing
ISBN: 9780281083985
Number of Pages: 384
Published: 30/09/2020
Width: 15.6 cm
Height: 23.4 cm
Description Author Information Reviews
In May 1931, Alan Don travelled from Dundee to Lambeth Palace to become Chaplain to Archbishop Cosmo Lang. During that journey he began a diary. He kept it faithfully for the next fifteen years, during which he also became Chaplain to the King and to the Speaker of the House of Commons. These positions afforded him a ringside view of some of the most momentous events in both British and world history - including the abdication of Edward VIII, the coronation of George VI, the rise of Hitler and the trauma of the Second World War. Now, for the first time, these fascinating diaries are laid open. They offer a wealth of detailed insight into the ecclesiastical, royal and parliamentary affairs of Britain and her elite during two historically significant decades. They also open a window on the history of the Church of England and its role in the social, political and military upheavals of the 1930s and 40s. Anyone who wants to know more about how Great Britain survived those turbulent times, will be amply rewarded by this engaging, perceptive and revealing eye-witness account.

Alan Don KCVO (1885-1966) was Chaplain and secretary to Cosmo Lang, Archbishop of Canterbury, from 1931 to 1941, Chaplain to the Speaker of the House of Commons from 1936 to 1946 and Dean of Westminster from 1946 to 1959. He was also a Chaplain to George V, Edward VIII, George VI and Elizabeth II. Robert Beaken is an Anglican priest and historian. His previous books include Following Christ (2020), The Church of England and the Home Front 1914-1918 (2015), Cosmo Lang, Archbishop in War and Crisis (2012) and Beginning to Preach (2004). He holds a PhD from King's College London, and is a Fellow of the Royal Historical Society and of the Society of Antiquaries of Scotland.