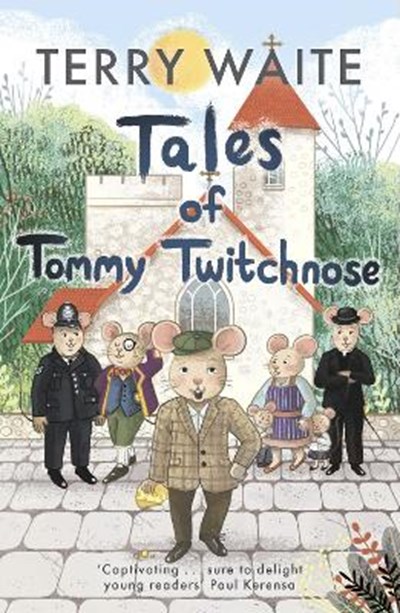 QTY
Add to Basket
Publisher: SPCK Publishing
ISBN: 9780281084029
Number of Pages: 128
Published: 17/09/2020
Width: 12.9 cm
Height: 19.8 cm
Description Author Information Reviews
Meet Tommy Twitchnose, who lives with his wife and two children in a cosy little house under the floorboards in a converted barnhouse. Tommy and his family have a happy life, foraging for scraps of food and doing up their home with bits and pieces dropped by the humans who live above them. But then, one day, their peaceful life is rudely interrupted. A large family of town mice suddenly appears on their doorstep, led by a daring and determined mouse called Danny, who announces that they're moving in... The adventures that follow will charm, amuse and amaze all who read them - children and grown-ups alike! Contents 1. The surprise visitors Tommy Twitchnose and his family receive an unwelcome surprise when some unexpected visitors arrrive, led by the daring Danny Dockmouse (Tommy's long-forgotten cousin), who has led his large family all the way from London to seek a better life in the country. 2. A happy Harvest Festival Tommy and his family join the church mice, who live nearby, to celebrate the Harvest Festival. The joyful service is conducted by a mouse by the name of the Reverend Albert Pew, who leads them in singing some funny animal versions of well-known harvest songs, and tells them about his new plan to make sure the church mice (who are very poor) will have enough food to last them another year. 3. Fun and games at a party All the mice are invited to the annual garden party held in the grounds of the stately home of Lord Whiskers of Whiskerton. They travel there on the Moles' Underground Express and when they arrive are amazed by a series of daring circus acts performed by a group of acrobatic frogs, two squirrels and the brave contestants in the annual Grand International Vole Swimming Race. 4. A visit to the Houses of Parliament Lord Whiskers is an honourable member of the House of Mice, which has its premises under the Houses of Parliament in Westminster. He invites his new friends Tommy and Danny to join him on one of his visits, but trouble follows when Danny decides to explore the House upstairs and ends up trapped in a Big Red Box used by the Prime Minister. 5. The Small Animal Rescue Service The Reverend Albert Pew asks Tommy to take charge of a new venture called the Small Animal Rescue Service, which is designed to transport sick animals quickly to the Small Animal Hospital. It is the day of the parish picnic at the seaside, and Tommy flies there on the back of a friendly seagull; but before they get there they notice an animal in distress on the rocks below, and swoop down to the rescue. 6. The very naughty squirrel Tommy's wife, Tiggy, helps to run the new village shop, but is alarmed when she discovers that someone is helping themselves to things without paying. PC Charles Catchem takes charge of the operation to find out who's behind crime, and with the help of Barney the Barn Owl he devises a clever trap to catch the thief red-handed.

Terry Waite MBE, CBE is a British Quaker, Anglican, humanitarian and author. His first book, Taken on Trust (Hodder 1993, 2016), was written in his head during his imprisonment by Islamic militants in the 1980s. He is also the author of Out of the Silence: Memories, poems, reflections (SPCK, 2016), Solitude: Memories, people, places (SPCK, 2017) and Travels with a Primate (SPCK, 2019). His novel, The Voyage of the Golden Handchake (Silvertail Books, 2015) was described by James Runcie as 'Completely barmy, eccentrically English and thoroughly entertaining'. Rotem Teplow is a freelance illustrator living and working in Israel. She graduated from Shenkar College of Design in 2016. Rotem currently works with Israeli newspapers, magazines and publishers.