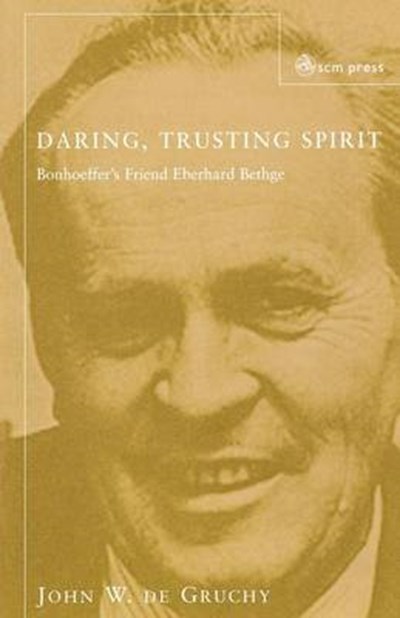 Join now Find out more
Publisher: SCM Press
ISBN: 9780334029687
Number of Pages: 248
Published: 31/08/2005
Width: 14 cm
Height: 21.6 cm
Description Author Information Reviews
Daring, Trusting Spirit - as Bonhoeffer called his friend in a poem written from prison - offers new historical information and insights into Dietrich Bonhoeffer's "Eckermann." Like Goethe's scribe, Eberhard Bethge devoted his life's work to ensuring that Bonhoeffer's contribution to Christian thought would not be forgotten, yet he deliberately chose to remain in the background. This book is a portrait of a remarkable theological friendship and a reflective essay on how history is written. It provides valuable new information about Eberhard Bethge that may, in turn, give readers new insights into the life and legacy of Dietrich Bonhoeffer himself. Drawing upon new archival documentation and previously unpublished essays and letters, Daring, Trusting Spirit explores a theological friendship - in life and death -- between two remarkable thinkers.

John W de Gruchy is Director of the Graduate School in Humanities and is the Robert Selby Professor of Christian Studies at the University of Cape Town.

John de Gruchy is the Robert Selby Taylor Professor of Christian Studies at the University of Cape Town. Victoria Barnett is a Bonhoeffer scholar and author of many published works.

"This beautifully written account of Bethge's life and work, by one who knew him and corresponded with him, is an excellent way in to the life and work of Bonhoeffer." David McLaurin, The Tablet, 28 January 2006.

"The importance of this book cannot be underestimated for any serious student of Bonhoeffer's theology and its relationship to all the major issues confronting the Christian Church in the latter part of the twentieth century and the opening years of this present century. (...) De Gruchy is at his best in these segments of the biography where Bethge comes into his own. How Bethge and de Gruchy met and how their friendship and collaboration helped de Gruchy's own struggles to abolish Apartheid, the "official" racist oppression of Blacks in South Africa, and promote peaceful reconciliation under a new, integrated government in that country is a captivating read. Few biographies of famous men can rise to the level of insightful commentary and character development that de Gruchy has achieved in Daring, Trusting Spirit. Geffrey B.Kelly, S.T.D, LL.D, Professor of Systematic Theology, La Salle University, Philadelphia, PA 19141, USA, Journal of Theology for Southern Africa, Vol 124 (March 2006).

"The book is balanced and non-partisan; the chronological structure enables great diversity of material to be effectively presented. Its study will profit many, including those who bring only a general reader's acquaintance with Bonhoeffer, his friend, and the catastrophic time through which they lived." Jim Garbett, Crucible, April-June 2006.

"In his definitive biography of Bonhoeffer, Bethge consistently played down his own roles in order to emphasize the legacy of his friend. This book by John De Gruchy, editor of The Cambridge Companion to Dietrich Bonhoeffer, provides us with a splendid introductory biography to the other half of the friendhsip, Bethge himself. (...)This is an important study and I heartily recommend the book." Robert G.Bates, Westminster Institute of Education, Oxford Brookes University, Epworth Review, April 2006.