Woman of No Importance

The Untold Story of Virginia Hall, WWII's Most Dangerous Spy 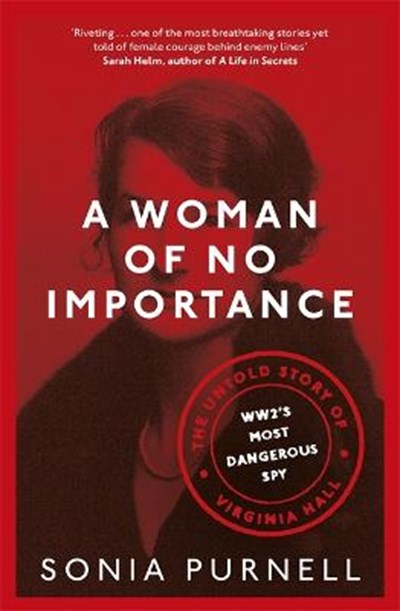 Woman of No Importance

The Untold Story of Virginia Hall, WWII's Most Dangerous Spy

Publisher: Little, Brown Book Group
ISBN: 9780349010182
Number of Pages: 416
Published: 28/03/2019
Width: 16 cm
Height: 23.6 cm
Description Author Information Reviews
***BOOK OF THE YEAR: THE TIMES and SPECTATOR *** A NEW YORK TIMES BESTSELLER*** 'A rousing tale of derring-do' The Times Book of the Week 'A cracking story about an extraordinarily brave woman' Telegraph Best Holiday Beach Reads 'As riveting as any thriller, and as hard to put down' Mick Herron, New York Times 'Gripping ... superb ... a rounded portrait of a complicated, resourceful, determined and above all brave woman' Irish Times In 1942, the Gestapo would stop at nothing to track down a mysterious 'limping lady' who was fighting for the freedom of France. The Nazi chiefs issued a simple but urgent command: 'She is the most dangerous of all Allied spies. We must find and destroy her.' The Gestapo's target was Virginia Hall, a glamorous American with a wooden leg who broke through the barriers against her gender and disability to be the first woman to infiltrate Vichy France for the SOE. In so doing she helped turn the course of the intelligence war. This is the epic tale of an heiress who determined that a hunting accident would not define her existence; a young woman who gambled her life to fight for the freedoms she believed in; an espionage novice who helped to light the flame of French Resistance. Based on new and extensive research, Sonia Purnell has for the first time uncovered the full secret life of Virginia Hall, an astounding and inspiring story of heroism, spycraft, resistance and personal triumph over shocking adversity. An Amazon.com Book of the Month * USA Today 5 Must Reads * New York Times Editors Pick

Sonia Purnell is a biographer and journalist who has written for The Guardian, the Daily Telegraph, and The Sunday Times. Her book First Lady: The Life and Wars of Clementine Churchillwas a book of the year in the Daily Telegraph, the Independent and Lenny Letter, and was shortlisted for the Plutarch Award for Best Biography. Her first book, Just Boris: A Tale of Blond Ambition, was longlisted for the Orwell prize.