What are We Doing Here? 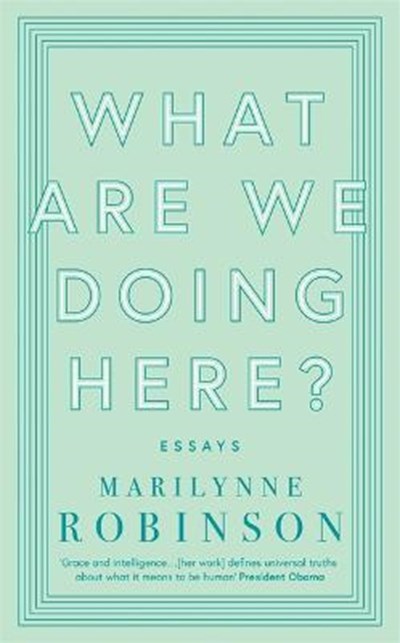 What are We Doing Here?

Publisher: Little, Brown Book Group
ISBN: 9780349010465
Number of Pages: 336
Published: 20/02/2018
Width: 14.9 cm
Height: 22.5 cm
Description Author Information Reviews
New essays by the Orange and Pulitzer Prize winning author of Gilead, Home and Lila. In this collection, Marilynne Robinson, one of today's most important thinkers - admired by President Obama, and so many others - impels us to action and offers us hope. Marilynne Robinson has plumbed the human spirit in her renowned novels, including Lila, winner of the National Book Critics Circle Award; Home, winner of the Orange Prize; and Gilead, winner of the Pulitzer Prize and the National Book Critics Circle Award. In this new essay collection she trains her incisive mind on our modern political climate and the mysteries of faith. Whether she is investigating how the work of great thinkers about America like Emerson and Tocqueville inform our political consciousness or discussing the way that beauty informs and disciplines daily life, Robinson's peerless prose and boundless humanity are on full display. What Are We Doing Here? is a call to continue the tradition of the great thinkers and to remake political and cultural life as "deeply impressed by obligation [and as] a great theatre of heroic generosity, which, despite all, is sometimes palpable still." In our era of rampant political and cultural pessimism, we run the risk of becoming bogged down in disillusionment and of losing sight of ways out of the mire. In What Are We Doing Here?, the incomparable Marilynne Robinson offers us balm: impelling us to action, but offering us hope.

Marilynne Robinson, author of Housekeeping, Gilead, Home, Lila and Jack, is the winner of the Hemingway PEN award, the Pulitzer Prize for Fiction, the National Book Critics Circle Award, the Women's Prize for Fiction and has twice been nominated for the International Booker Prize. She has also published six volumes of essays. In 2012 she was awarded the National Humanities Medal by President Obama and in 2016 she was given The Library of Congress Prize for American Fiction and was one of Time magazine's list of 100 most influential people. She lives in Iowa.